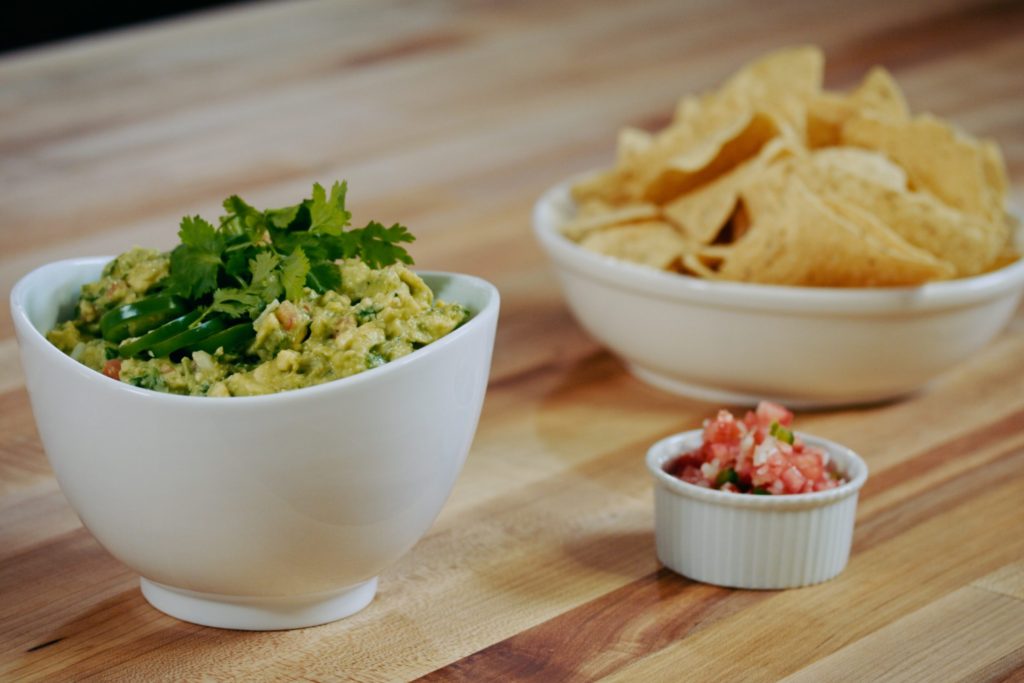 The Big Game is less than a week away! It’s time to stock up on the essential Super Bowl munchies. Sure, you’ll pregame with wings and hot sauce. Chips and pretzels are fine for instant replays. Pizza will support you through Lady Gaga’s halftime show. But the undisputed MVP of the big day is a heaping plate of nachos with all the fixings. And what would nachos be without guacamole? That smooth and scrumptious avocado dip just pulls it all together.

Here’s the problem: Like so many promising rookies, avocado (which is guacamole’s principal player) has an extremely short career. Everything fades eventually, but a cut avocado loses its luster faster than you can say Tim Tebow. When an avocado’s flesh (rich in polyphenol oxidase) is exposed to oxygen, it quickly turns an unappetizing shade of brown. The riper the avocado, the faster it goes.

You can try to prevent an avocado’s oxidation with lime juice (it still turns brown). You can cover the fruit with plastic wrap (it still doesn’t help—and makes it pretty hard to eat). There is even the old wives’ tale of leaving the pit in the fruit (another misguided superstition).

What you want is a guacamole with longevity, like a 200-game player. And we’re happy to tell you that there’s a solution. A magical ingredient called sodium bisulfite will keep your guac green and fresh from the day before the big game to the final seconds of the fourth quarter and beyond. Not only that, but sodium bisulfite has no taste of its own, so the avocado flavor stays pure. And the best part: The ability to make your guacamole ahead of time gives the flavors of your other ingredients (tomatoes, cilantro, cumin, etc.) a chance to mingle and develop fully.

Guac is probably one of the healthiest players in your game day snack lineup. Once you try it, we’re confident you’ll discover that avocados and sodium bisulfite are an eternal combination—sort of like Brady and Belichick.

Few foods are more alluring than the avocado. This fruit seduced the Spanish conquistadores arriving on the coast of Mexico, who compared its flesh to butter. Crack open its crocodile skin, reveal its creamy interior, and revel in its faint hazelnut perfume. Admire how its flesh goes from jade around its rim to pale buttercup-yellow in the center.

Fun fact: The Aztec name for avocado is aoacatl, which means “testicle”—conjuring up an alternate image for the phrase “grow a pair.”

Proper guacamole is a mix of ingredients, which might include tomatoes, onion, garlic, cilantro, lime, chiles, and even pineapple. But the main attraction is the silken, subtle avocado. Guac’s many variations are equally at home on a family table in Oaxaca, a fine dining establishment in LA, or a tailgating party in Detroit.

Over the years, guacamole has been mortar-and-pestled, food processed, chopped, and blended smooth. We recommend you mash the avocado lightly to maintain a chunky texture and rustic appeal. Pureed avocados are lovely in soups and in Michelin-starred garnishes, but a perfectly smooth guacamole lacks character—like something you’d get from the supermarket.

Sodium bisulfite (NaHSO3) is an antioxidant that kills fungus and microbes. For a long time, it has been used to preserve the freshness of vegetables, fruits, and juices. For instance, it keeps leafy greens and apples from turning brown in salad bars. It’s also used in wine to preserve the flavor and color, and added to fruits before they are canned or dried. Besides inhibiting browning, sodium bisulfite also prevents vitamin and flavor loss.

Vegetables and fruits treated with sodium bisulfite can be heated and cooked up to 212°F/100°C without losing much color. They will typically last about five days before they begin to fade and smell “grassy.”

Sodium bisulfite would be perfect except that it occasionally triggers mild allergic reactions in sensitive people. This can generally be avoided by limiting its use to no more than 1.25% of the weight of your entire recipe. Obviously, if you have ever had an allergic reaction to sodium bisulfite, you’ll want to leave it out of your guacamole.

Then rest and relax.

The following guacamole recipe should chill for at least 40 minutes to give the flavors time to properly meld. But thanks to the sodium bisulfite, you can prep it ahead and refrigerate it overnight, or even for a couple of days.

Come game day, you can relax while all your buddies enjoy your epic guacamole. And may the team with the biggest aoacatls win. 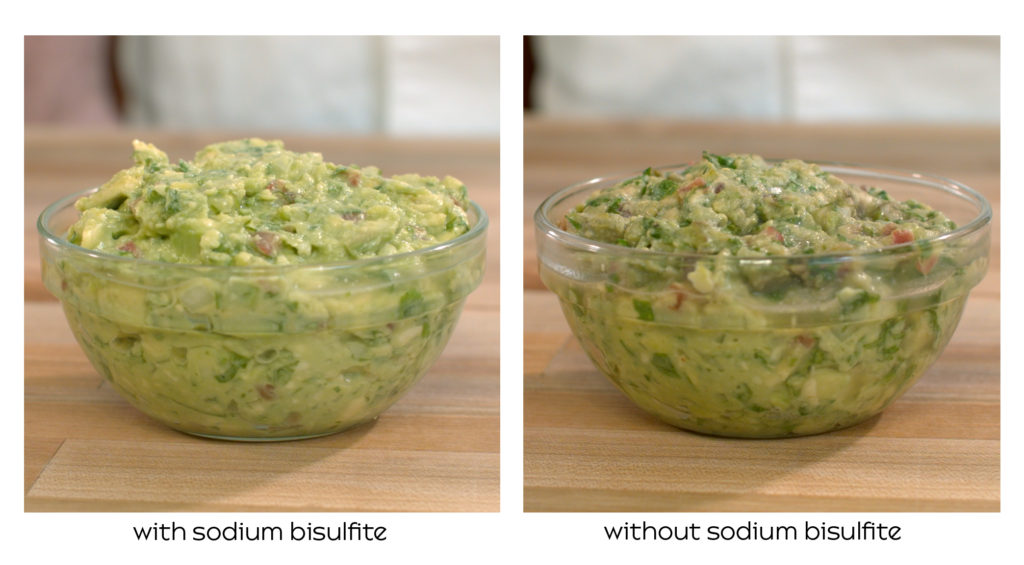 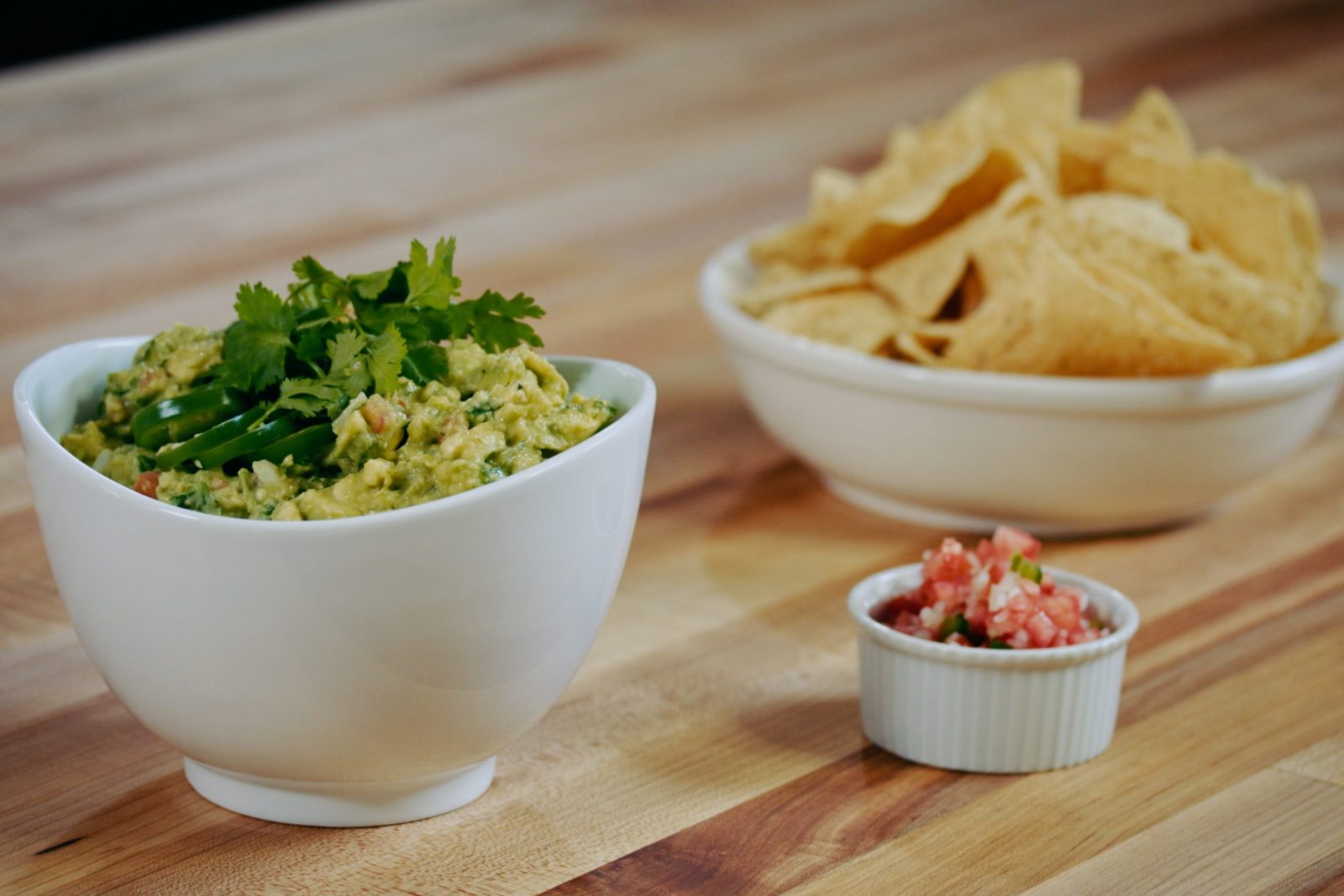 by cilantro, you mean fresh coriander.
the REST of the recipe was in English.

Coriander, cilantro and Chinese parsley all refer to the same herb here in North America. Cilantro is commonly used especially when referring to Mexican cuisine. Given the extensive use of French in classical cooking terminology, the mixing of languages in recipes is more the rule than the exception.

Could you give us a volumetric measurement for the equivalent to 0.8 grams measure for Sodium Bisulfite… is that a quarter teaspoon? an eighth teaspoon?

It is around 1/8 tsp. However, we do not recommend using volume measurements for most of our functional ingredients. They are generally used in very small quantities and approximations or eyeballing can lead to undesirable results. Measuring by volume can lead to significant differences in the amount used based on factors like spoon size and shape, how much it is filled, how compressed the product is and even humidity. If you want to get the best results we suggest getting a scale that will weigh in tenths or grams.

I tried this recipe as written and it was horrible. Had a very off taste of salt & sulphur. I did some research and your recipe is on the right track but, the sodium bislufilte is way off. There is a paper on methods to preserve avocados from the Univ of Florida. Their tests show that 30 mg of sodium bisulfite in 100 gram of avocado is sufficient to prevent significant browning for at least 3 days. Using your quantities, that is 180 mg of sodium bisulfite and NOTt the 0.8 gram as suggested.
180 mg = 0.180 grams. I have made quacamole using the MUCH SMALLER amount of sodium bisulfite and could not detect any off taste at this much lower concentration. ref https://fshs.org/proceedings-o/1968-vol-81/230-235%20(BATES).pdf

We usually use 2 avocados 300 grams

Hi Steve, thanks for sharing your take on the recipe. If the lesser amount of bisulfite is working that’s awesome. We’ve tested this recipe many times internally, particularly when we have a cookout or company party, and we’ve been happy with the results. We don’t believe there is an absolute best recipe out there, and if our recipe inspired you to improve upon it and make it your own even better. 🙂

Hi, is there any way to use this to preserve an avocado that one is NOT turning into guacamole (or some other mashed preparation)? I frequently want to use, say, half an avocado, and no matter how tightly I wrap the remainder, I find it goes brown and horrible before I can use it.

Yup, you can dip the cut side in a sodium bisulfite solution.