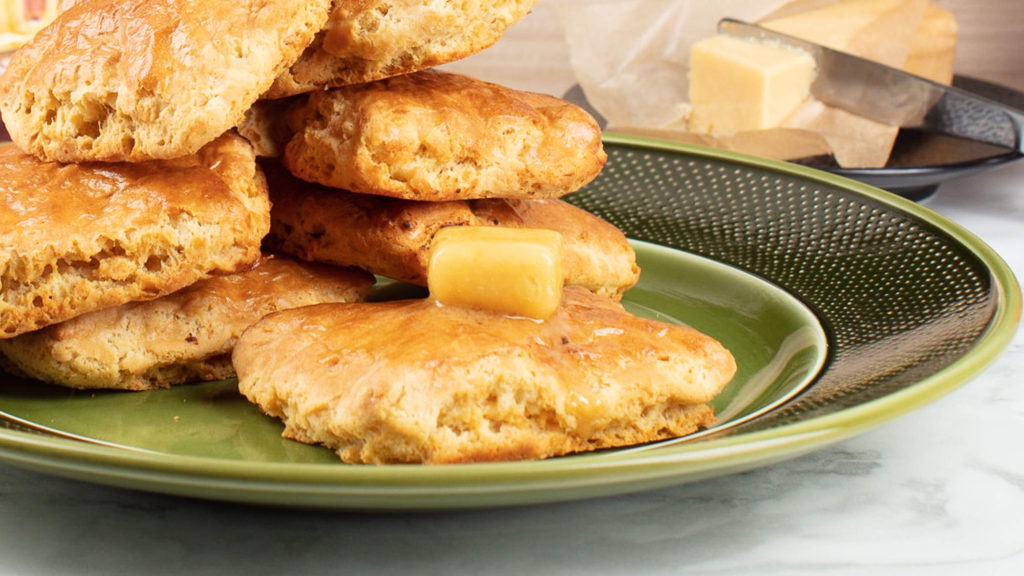 I have a confession to make, and please don’t forward this article to my southern belle of a wife. The first biscuit I ever ate in my life was from KFC and the second was from Popeyes. I couldn’t wrap my head around why I loved these disc shaped dinner rolls so much. As a child you definitely don’t think to start asking about the hydration or the butterfat content of the dough. The only thought I had was “this is delicious, how can I convince my parents to drive me to KFC every day”. Let’s break down why Biscuits are so delicious. First thing you notice is the buttery smell. Second, the balance of crispy exterior and tender interior. Third, that perfectly balanced flavor. But how can you improve on an already great roll, we think so?

“What makes a great biscuit?”

The Biscuit of Tomorrow

The first issue with most biscuits is their shelf life. Hours after they come out of the oven they are rendered useless. Even re-heating them will only revive them so much. So we decided to add Sodium Stearoyl Lactylate(SSL) to our dough. This is an ingredient that works in two ways, it is both an emulsifier and improves the volume of the dough. SSL helps prevent the butter from leaking out of the biscuits while cooking, producing a more tender texture. SSL also helps after the baking process by preventing the biscuits from going stale for a longer period of time. We were able to reheat our biscuits 4 days after cooking with very little change in the texture.

When we developed our biscuit recipe we wanted to test a variety of different fats to see if we can create some outside the box flavors. Initially we wanted to create a peanut butter biscuit and replace the butter with peanut butter and peanut oil. This was a complete failure, we even tried ratios of 50/50 and 75/25 butter to peanut butter. While they were better than 100% peanut butter, this was not the route to go. The proteins in the peanut butter gave the biscuits a dense, gritty, chalky texture. This was not worth testing again. Then we tested shortening, it was fine but lacked the signature buttery aroma of biscuits. So ultimately, we ended back at butter, it was just the best.

Next we decided to try and incorporate a method for scotish shortbread in these biscuits. Basically scottish shortbread is grated butter that has been frozen solid. The grated butter is then mixed with a dry mixture of flour, sugar, salt and leavening. There is not a drop of liquid in the recipe. Basically you pour the frozen grated butter into the flour mixture, mix it 2-3 times and dump it into a pan. When you look at it, it looks like it will never work. It looks like you are baking plain flour in a pan. Scottish shortbread does not look like dough, but if the ratio is correct the butter will hydrate the dough and become the most amazing short bread you have ever had. So we took the idea of grating and freezing the butter then just barely mixing the ingredients until they are hydrated. Then 4 book folds and absolutely no kneading. We wanted the biscuits to walk the line between high hydration drop biscuits and a cut biscuit. A drop biscuit has a high ratio of water which makes it difficult to roll and cut into disks. So typically people will just “drop” it on the baking sheet. A cut biscuit is what most people think about when they hear biscuits, they are typically a tall, fluffy, circular disk. We wanted to try and find a sweet spot in between these two biscuits.

But as I mentioned my lovely wife before, she gave me a great idea. When she makes her biscuits she doesn’t use butter, in fact she uses no solid fat. My wife is an old soul and she makes biscuits by sight and touch … not by recipe. With that being said she nails them every time. Her secret is that she uses heavy cream in place of both butter and buttermilk. If you think about it it’s kind of genius the butter milk and butter are all contained in the heavy cream. So we took this concept and devised our own version of this. We ended up using an amalgamation of a few different ideas in our biscuit recipe. We used 1/2 heavy cream, but we also wanted to add some sort of cultured buttermilk since we were going for a high hydration, high butter fat content dough that was somewhere in between drop biscuit and cut biscuit. We tested a few different types of cultured milk products – buttermilk, yogurt, and kefir. We wanted to taste them side by side and see what one gave the best flavor to our dough. Buttermilk was fine but it actually seem drier than the others. Yogurt also created a slightly more dense dough. Surprisingly, we found that kefir was actually the most flavorful and lightest of all three. The carbonation also helped with the volume of the dough prior to cooking. We love the flavor that the fermented kefir brought to the biscuits.

One last thing we wanted to experiment with was making the crispiest biscuit we have ever had. Thankfully this one worked better than we expected. First we wanted the gluten structure to be as short as possible for our shortbread. So along with the Scottish shortbread technique we talked about before we replaced some of the flour in our recipe with EverCrisp. EverCrisp is an ingredient used to keep fried foods crispier for longer, you can read all about it in this article here . Our thought process is Fat+Flour+Heat= crispier batters, breading, and ultimately breads. So we tried it and it worked out great! This batch had the crispiest overall exterior of any batch we had made. So all these little things we did made this our favorite biscuit recipe yet. Most of all my wife approved of them so I’ll definitely put this one in the win column.

Give our Southern Comfort Biscuits with Pineapple Butter recipe a try! Close your eyes and conjure up the perfect biscuit. It’s crispy on the outside, light and tender on the inside, with a rich buttery aroma. We tested and tasted for the holy grail of biscuits, and found it in a combination of grated frozen butter, kefir, and EverCrisp. To top it off we made a quick and easy pineapple butter that adds an extra dollop of sweet buttery accent to this superb biscuit.

Is the same ingredient that I need for crescent rolls? Most of the time they are great (slap you mama an kiss a donkey great). Do everything the same, every time the same. This last weekend they poured out butter an went flat. Both batches I made. Same recipe, same oven, same proof time, same temp an time as all ways, same pans. I do not think the fact it was rain made them do that. Any help you might have.