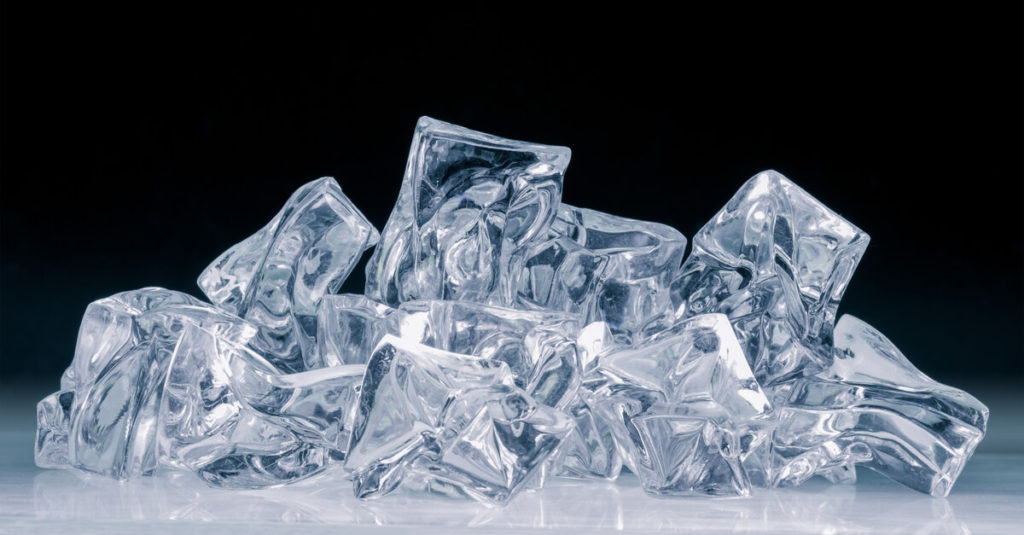 How to Make Perfect Clear Ice

It wasn’t uncommon in my younger years that I was given outrageous requests just because I went to culinary school. Years ago, when I was having my first sips of alcohol at the tender age of 21 (wink wink) my friends asked me to make what they referred to as “perfect ice”. We had a desire to class up our $13 plastic bottle of liquor. Unfortunately, I had no idea what they were talking about. When they pointed to the crystal clear ice cubes used in every commercial for alcohol, I sadly informed them that I didn’t think it was possible. I was sure they were plastic ice cubes used just for photography. More than a decade later I can now make those crystal clear perfect cubes of ice. On top of that I can make them for nicer cocktails too! But how exactly does perfectly clear ice work?

“How can you make perfect crystal clear ice?”

So what’s the issue with regular ice? Technically nothing, it’s still cold, it still cools a cocktail perfectly. But the white crystalline center makes it seem less refined. With the ever evolving search for perfection that is culinary arts, we want to make things that are visually appealing as well as delicious. The ability to remove those seemingly imperfect ice crystals from ice cubes is visually appealing. But what are those ice crystals? As water freezes and turns into ice, the exterior will freeze first. As the water turns into ice it expands. The water continues to freeze inward and once it gets to the center the ice has no place to expand to and the pressure creates gasses that produce the crystalline structure. So how do you prevent this from happening?

The best thing to prevent the crystals is just that. Stopping the freezing before it has a chance to happen. This is easiest to do with a cooler. The method is simple, force the ice to freeze from top to bottom and remove it before the bottom begins to freeze. In a small cooler with the lid removed, pour 1 gallon of boiling water. I like to boil the water since it will heat up the cooler and keep the bottom water warmer for longer and allow the top to freeze first. Place the cooler in the freezer and allow it to freeze for 18 hours at 0°F (normal household freezer temperature). What this does is allow the bottom to stay liquid while the top freezes. This is called directional freezing. When you remove the ice after 18 hours the top will be a solid clear block of ice and water at the base. It’s incredibly simple, basically just don’t give the water a chance to freeze solid and you won’t have the issue of the crystalline texture.

So, how do you cut this block of ice into perfect cubes? This is also surprisingly easy, but can turn into a disaster if you are not patient. First you will need to allow the ice to temper. This is done by allowing the ice to start to melt. The ice can be brought to 15°F or above. Although it is difficult to stick a thermometer into a block of ice. Do not rush this! Taking a kitchen torch to the ice in order to “speed up the process” will just cause it to shatter, no matter how gentle you are. The best way to do this is place the ice on a sheet pan (to catch any water). Once the ice has begun to melt on the surface, take a serrated knife and drag it across the ice in a sawing motion. If the knife barely scratches the surface of the ice give it more time to temper. The serrated knife should easily cut about ⅛ – ¼ of an inch into the ice with a few drags of the knife. Once this happens use the knife to saw an outline of the block you are trying to cut. After the ice has been cut on all sides, place the knife in the outline and tap it with a mallet. Be patient with this step, if the ice needs more time to temper give it time. Eventually the ice will come off in blocks. We suggest starting with long rectangles and then cutting them into cubes. Also measure the cup you are attempting to put the ice into. This will help you find the best size to start with. Now that you have some ice cubes that are just perfect you can take any jagged edges and rub them on a room temperature sheet pan until the sides melt and become flat. Also if you wanted to get fancy you could use an ice pick to chip the ice into a perfect sphere. But that is a whole ‘nother task unto itself.

Ready to get inspired? Check out our Tomato Paloma cocktail recipe, by Arron at Alice and the Magician.

Once upon a time Aaron went on a quest for the Perfect Lime in Mexico. During his journey he encountered two drinks that blew his mind:  the Paloma and the michelada.  The paloma is a tequila-based cocktail most commonly prepared by mixing tequila with a grapefruit-flavored soda served on the rocks with a lime wedge. A michelada is a Mexican cerveza preparada made with beer, lime juice, and assorted sauces, spices, and peppers. Aaron designed the tomato paloma to combine the best of both of these experiences into one tart, balanced, refreshing, complex cocktail using modern ingredients