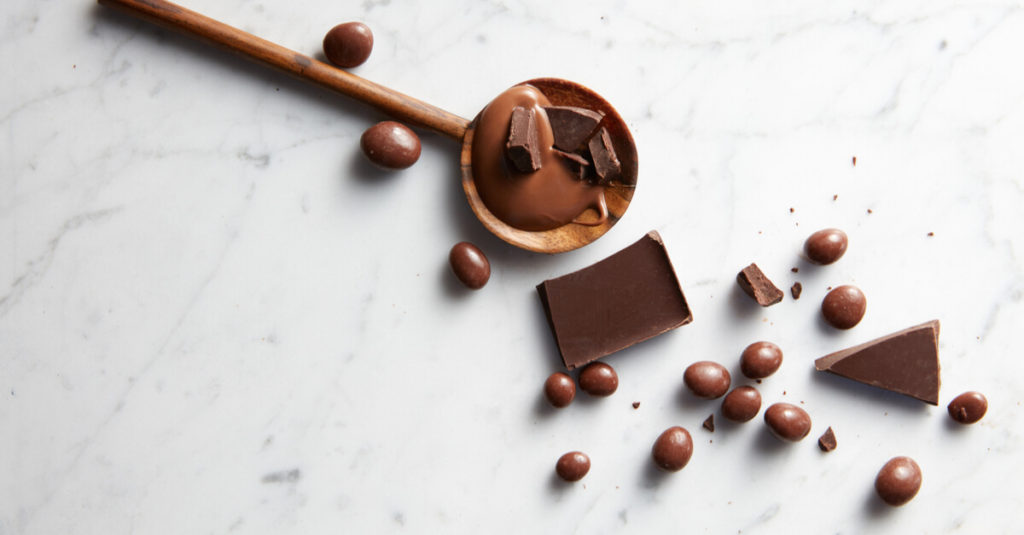 Keeping the Pops on Lock With Chocolate

Culinary Crystals are a great way to add intrigue to any dish. They are a customizable pop rock style candy that can be used in sweet or savory applications. But adding them to any dish takes a little bit of know how. You’ve heard cliche, “one bad apple spoils the whole bunch”?  Well, a little bit of water can set off a popping chain reaction with Culinary Crystals. The one thing you absolutely need when you get the Culinary Crystals is the flavor base. The flavor base is a thin fat coating that hardens and can protect the crystals from the ever intrusive, water. So what about other fats? It’s commonly forgotten that chocolate is fat. It has tons of flavor and doesn’t feel greasy. So can you use fats like this to coat your Culinary Crystals?

“Could chocolate be the perfect coating for Culinary Crystals?”

Coat It So You Can Float It

Pro tip: Make sure the chocolate is just barely melted as adding too much heat can pop the crystals.

The crystals can be spread out and separated onto a non stick mat and allowed to set for 1 minute in the freezer. These small chocolatey crystals can then be added to your favorite dishes. Sprinkling some chocolate crystals onto chocolate mousse or adding them into an ice cream is a breeze. Just make sure they are completely coated and you can have chocolate culinary crystals in no time.

An issue that has come up recently is adding Culinary Crystals to chocolate ganache. Ganache is a mixture of cream and chocolate. With such a high amount of fat, ganache seems like the perfect place to add Culinary Crystals.  While the crystals may not pop and fizz immediately when they are added to the ganache the small amount of water from the cream will activate them over time and dissolve them into little sad syrup pockets. So as we said before make sure it is chocolate and only chocolate that you are adding to the culinary crystals. If you want to add chocolate coated crystals to a ganache you will need to follow some rules. To add the crystals to ganache you will need to make sure the ganash is not hot enough to melt the chocolate. We suggest the ganache be cooled before folding the coated crystals in, or else you will end up with the same result.

So then next time you want to innovate using Culinary Crystals, follow these tips to hopefully get the best out of the dish you are preparing.