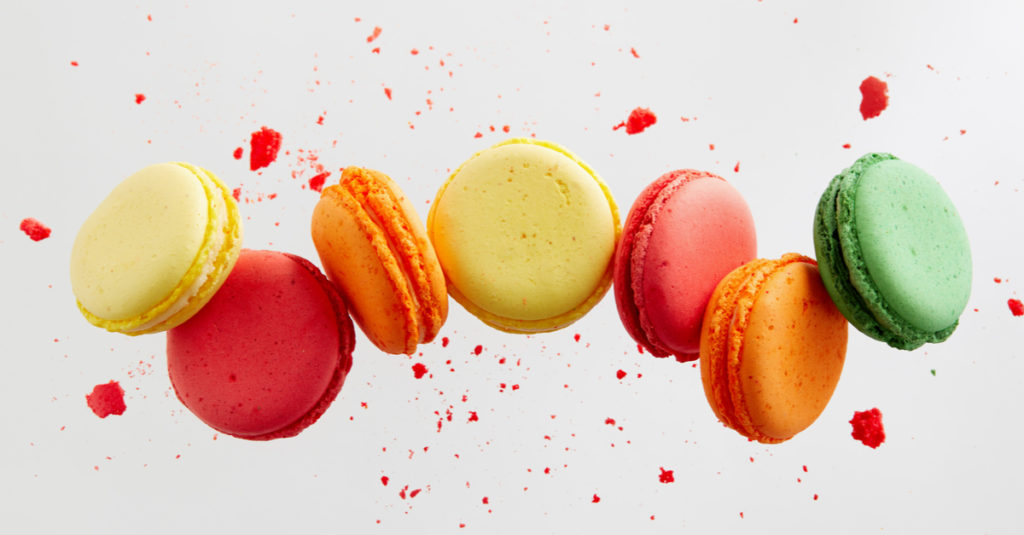 Most of the time in this age of the internet we only show ourselves at our best. We tend to pick the image that is closest to perfection as possible. Then post it to social media and watch the likes and heart eyes emojis pour in. But what about all those times when we fall flat on our faces? Why can’t we show the world ourselves in our most vulnerable moments. Well in a way, this article is just about that. This is an article to showcase that not everything comes out the way you envisioned it. The one recipe that has nearly broken my spirit over the last month has been developing a new way to make a french macaron. I wanted to make a vegan alternative that used the same traditional method, but in this case I wanted to stay away from Aquafaba (the liquid inside of a can of chickpeas) due to its beany flavor. I asked myself the question…

“How hard can it be to make vegan macarons without aquafaba?”

Buckle up, because this may be quite the journey. A lot of failed tests occurred in the attempt to make these vegan macarons. First bit of business was of course to replace the egg whites because they aren’t vegan. Everything else in a macaron is vegan so this should be easy! I decided to replace the egg whites with versawhip, an ingredient that can turn any liquid into a meringue. I stabilized the versawhip with a small amount of xanthan gum and it whipped up beautifully. I decided on a simple method for macaron which used a french meringue (Meringue made with granulated sugar) that is mixed with equal parts powdered sugar and almond meal. I tested this with egg whites and the recipe worked perfect.

I followed the method to a tee, piped them onto a silpat, dried them for 20 minutes then baked them off at 300°F. The shells that formed during the drying process held their shape but the rest of the cookie that should be inside that shell leaked out. These puddles made for a very sad looking cookie. I fiddled with the almond meal ratio a few more times to see if that was the issue. Spoiler: It wasn’t. The same issue happened every single time I tested, no matter the ratio.

Back to the drawing board: I wanted to add something to the meringue to make it react more like egg whites. So here is my thought process about this – when you cook egg whites the proteins coagulate and create a nice structure for the almond meal and sugar to reside. So, with this thought I broke out the different types of methylcellulose, This way when the mixture heats up it will gel (methylcellulose gels when heated) and keeps the filling from leaking out of the cookie. Theoretically this sounds like a perfect solution, but that’s why you must test theories. With all my tests I found that methylcellulose was not the answer, as good as it sounded it had no benefit. The macaron still completely flattened out, no matter what amount or type of methylcellulose I used. I used 4 types of methylcellulose, all with high gel strength and low temperature gelling as well. Other attempts to salvage the idea of methylcellulose included different ratios and baking time/temperatures. High ratios made the batter too thick to pipe properly and the time/temp proved to have no effect on the leaky macaron. So after about 15 more tests, I had to rule out methylcellulose as an option.

Next tests: Try different ingredients to see if anything helps with the structure. The next two tests were tapioca starchand vital wheat gluten. The tapioca starch at even small amounts gave a starchy texture, and at high amounts made the batter too thick. Vital wheat gluten never had the chance to develop and provide the structure needed. Once again the amount that would be needed to make this recipe work would be so much that they wouldn’t resemble macaron.

Next change (as I attempted to nurse my crushed soul back to good health): I had an idea to change the method all together. I moved to an Italian meringue (meringue and soft ball stage 240°F sugar) method borrowed from our friends at ChefSteps.com. This method was slightly more intricate than the last, but it made beautiful macaron and I knew it was a tested recipe. So my first batch was just to get baseline of how the recipe worked with versawhip and xanthan gum. I needed to think of a gelling agent I could add that would keep the structure of the meringue during the cooking. The batches still leaked out…but there was a shining light. The shells were amazing; they were crisp and had a beautiful texture. So that little victory gave me a new lease on life. I ran a few more tests to see if methylcellulose would work in this recipe (I really wanted this to work). It didn’t. I had an idea of adding protein to the recipe, so I added a large amount of soy milk powder to see if this had any effect. Low and behold it did, the filling did not leak out and they were in the shape of macaron! But the shells cracked on top and collapsed slightly after leaving the oven.

With this in mind, I would need to lower the amount of soy milk powder and create a more stable meringue. What I did was add gellan gum F to the meringue and when I poured in the hot sugar (240°F), it activated the gellan gum F. As the meringue whipped, it would cool and set the gellan gum F. The reason I used gellan gum F is that it does not melt once it has been set in a gel. My theory was to make a meringue that would would be super stable to counteract the lower amount of soy milk powder. While I am still currently testing this method, I am determined to have a recipe for amazing vegan macaron sooner rather than later. Keep your eyes on our blog and our social media channels to stay up to date on our progress

Its Not All for Naught

I am prepared to make fruit caviar to go with my gravlax presentation over new years but want to make sure that these spheres retain their liquid center and don’t become totally gelled-over balls with out a liquid core. Everything that I read suggests that they shouldn’t be kept in the solution for more than 30 – 60 seconds and consumed quickly (max 10 – 20 minutes). Otherwise they become solid masses.
I have used the Flavor Pearls produced by Christine Le Tennier (FR) which have a long shelf life and, once opened, can be stored for 3-weeks refrigerated. They retain a liquid center
Here’s my question:
1. What can I do to retain a liquid center while producing small caviar from fruit
2. how can I store these and retain the liquid center so that I can prepare a quantity 3 days in advance without the risk of a solidification.
it was suggested that I consider freezing the pearls first and then dropping them into either an agar or Alginate solution but I have no idea where I would secure a mold for fully circled pearls of caviar size… do you have any suggestions

You can use canned chickpea juice to make meringue. It’s the best vegan method I’ve ever seen for making pavlova etc.

That is how most people do it, we were trying to make a version without the aquafaba.

I have a request to make a croquembouche for an upcoming wedding reception. The challenge is that the bride requests everything at the reception to be vegan. I have made vegan pastry cream before, but I cannot find a way to design a reliable vegan choux. Do you have any ideas? I know there has to be a way.

It’s a great question but you’ve got us stumped there! We haven’t tried to work on this.