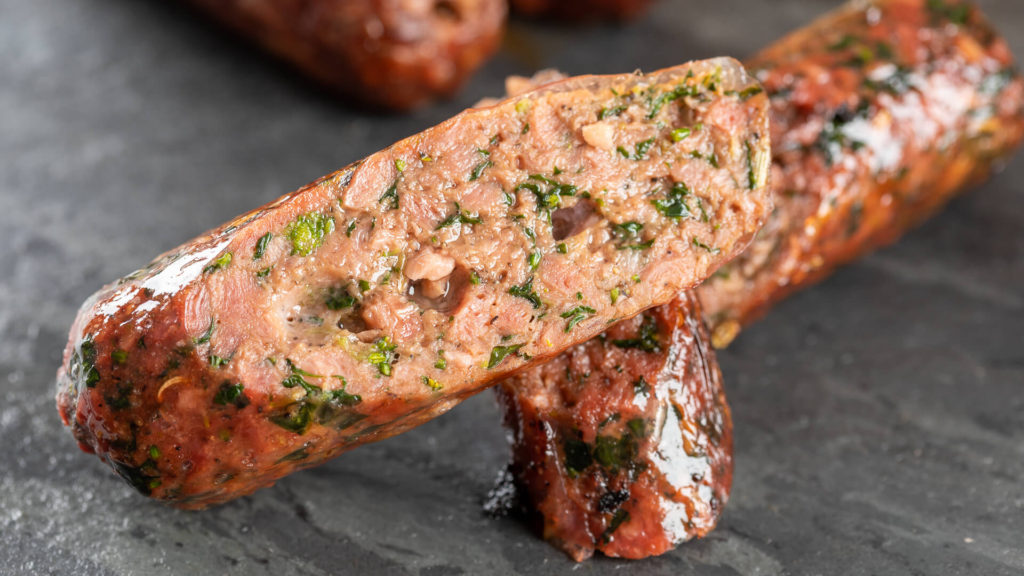 Oh boy, this one almost broke me. Plant based ground beef and burgers were one thing, but converting it into the structure of a sausage was quite the task. Sausage has so many textures that it was difficult to figure out. The bouncy texture of an emulsified sausage. Pockets of fat that are evenly suspended throughout and a skin that gives a bit of a snap when it’s cooked. All these things are quintessential to the experience of eating a sausage. Now take all those complex textures and convert them to be fully plant based. Spoiler alert it was difficult to figure out. So let’s go on a bit of a journey to see how we were able to make a sausage we are proud of. On top of that a recipe for you to try and see for yourself.

“So how do you make plant based sausage?”

I’ll start off by saying this, I made some truly disgusting foods in my attempt to perfect this sausage. It was all for the greater good. My journey took me down an odd path, I wanted to create a firm sausage that basically gelled before it hit the pan. My thought process was to lock in as much of the fats and juices as possible. I attempted a few early experiments with konjac gum but was unsuccessful, the texture was mealy and almost doughy. The sausages, well they were far from being sausage like. So with the knowledge I have I know there is a way to gel konjac gum easily. If you raise the PH of a mixture that contains konjac gum above 9 it will create a firm gel. It’s actually pretty amazing as you can see in our Shirataki noodles recipe. So I added the konjac gum to the plant based ground beef and placed it into a stand mixer. As I added calcium hydroxide (an alkaline calcium) the mixture turned green and smelled strongly of fish for some reason. So I decided to eat it in the name of science. My conclusions were just as my theory suggested… it was yucky. Back to the drawing board to find a gelling agent that could do what I wanted. I attempted many small tweaks with the recipe. Increasing the protein content, methylcellulose, and even grinding the TVP. None of these changed the recipe into anything resembling sausage. All these tests were just slightly worse versions of our original Plant based ground beef. I wasn’t getting anywhere and quite frankly I wasn’t even close. Nothing I had tried came close to sausage. I took a few days to work on the casing which was actually the easiest part. The casing is basically an intense form of spherification. A high concentration of perfected sodium alginate in water will create a thick gel around the sausage. The sodium alginate then needs to be set in a bath of calcium. Then a little bit of drying will remove any excess water and leave a nice skin on the sausage. But in doing this It sparked an idea. What if I added sodium alginate to my sausage and used a calcium bath to set it. In theory the sodium alginate that runs through the sausage will create a firm gel similar to the emulsion of a sausage. To be honest, I dreamed about this working perfectly. As I made this test batch I was so confident I loudly exclaimed to all that would listen “this is IT”. In fact it was “IT” but unfortunately the “IT” had an “SH” as a prefix. “IT” did not work, it actually did nothing. My poor drawing board was getting a workout this session. By this point I was pretty discouraged, my brain felt fried an egg in an anti-drug commercial. I couldn’t even get close to what I wanted. I tinkered with the seasoning for the sausages and decided on what types I wanted to make if I ever close. The thought crossed my mind to switch up the type of methylcellulose, honestly It was kind of half hearted. I took a number of different methylcellulose and mixed them with water. Then I took a dollop of each of them and tested how they reacted to heat. I was impressed with one of them, it gelled quickly and had a firm bouncy texture. But in my broken, defeated state I lazily slopped a spoonful of the methylcellulose into some plant based ground meat and mixed it up with a spoon. This is not generally how I operate but I don’t think anything would work at this point. I cooked the mismash of plant meat and took a bite. I was shocked, it was bouncy and had a nice chew. I had a few people test it out and they all agreed, I had accidentally made plant based sausage! I made a few more tests, I added the ingredient directly to the plant based meat mixture and it did not work. I tried again and again, It did not work. I then tried exactly what I did before, pre hydrating the methylcellulose with water and then adding it directly into the plant based meat. I cooked it and it worked!. It wasn’t just the ingredient but it was the method. The binder needed to be added after the meat was made, but barely mixed in so it almost coats the meat and can encapsulate it. The heat then gels the binder and makes for a bouncy juicy sausage. We made some tweaks and found the perfect ratio. We are thrilled with how these sausages came out. The sausages can be used for patties, links, and even crumbled into sauces. We want to see how you use the sausages, check out the recipe below and try them for yourself.

Give our Plant Based Sausages recipe a try! Whether sweet, spicy or savory, the most important part of a sausage is the texture. It’s a special combination of firm yet juicy, springy not mushy with a succulent snappy skin. Our plant-based sausages take our plant-based meat and bring it to the next level with the addition of our Better Burger Binder, which uniquely firms up the sausage for a perfect bite every time.

I’m concerned about the Methylcellulose used in the sausage. I looked it up and it seems it has a laxative effect and other reactions can occur. I received some instant yeast from you and I’m wondering, is this the same kind of yeast that you buy in a store to bake bread? I’m confused with the items I’m seeing here. I needed yeast and your site came up, I guess I should’ve called or written first. Are the ingredients in the yeast man safe? Is this something you experimented with and came up with? I’m really in need of some knowledge on your products. Thank you

Hi Bernadette, methylcellulose is actually the main ingredient in a lot of fiber supplements. This is because it is an insoluble fiber. However, when used in most cooking recipes they are used in such small amounts that there is no risk of a laxative effect. I would recommend to better understand yeasts you can checkout our blog post on how to pick the right yeast.

What’s the difference between the cellulose in the burger binder and the Methylcellulose HV in the plant-based burger kit? Can one be substituted for the other? I’ve been working on vegan pepperoni for a couple of years now and want to try this method, but I just got an order from you today and not quite ready for another one 🙂

Hi Janie. Could you describe how the gel strengths of the Burger Binder and the Methylcellulose HV compare? Also, have you noticed any other differences between the two? E.g., behaviors at different temperatures, hydration ratios, etc.? Thanks for sharing this with us!

We haven’t tried using jackfruit, but I would recommend trying both the HV and the burger binder.

Can I use Vegan casing for smoking plant based sausage using your plant based meat base ?

Do you mean storebought casing? We’re not familiar with them so can’t really confirm without doing it.

Hi, What was the Water / Methylcellulose ratio at the pre hydrating process?

You can get all the steps in the full recipe.