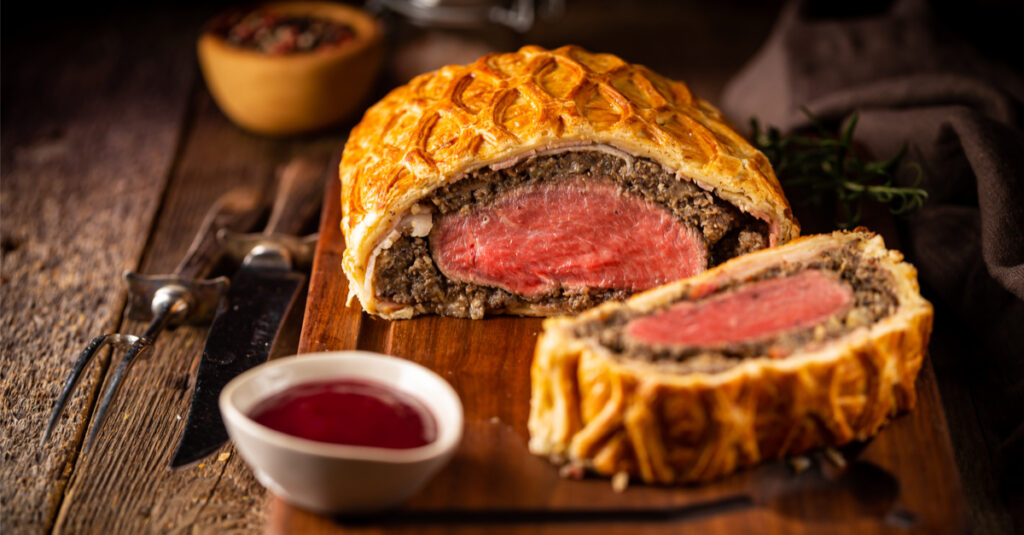 An issue I’ve always had was keeping my stuffing intact when slicing and serving. Stuffing commonly turns into just stuff that falls out and burns during the cooking process. So I wanted to think of a way to make it better. When making a beef wellington or a roulade I want the interior to stay intact just enough to slice and serve without any mess or waste. But commonly that doesn’t happen. Some stuffings have added eggs or farce (pureed meat) to keep them intact but that adds a specific texture that can sometimes get over cooked and become gritty or rubbery. So is it possible to use some modernist magic to make a soft delicate stuffing that doesn’t

“Can you make stuffing that stays-put?”

Make that Stuffing Stick Around

So recently this has crossed my mind so we decided to do some testing. Fortunately it’s come along rather quickly. The idea comes from wanting to bond the stuffing (duxelle) to the outside of a beef wellington. I thought if the stuffing was bonded to the meat it would make for a better presentation. I wanted to serve the wellington slice upright rather than laying it on the plate. That can be pretty difficult to do without stabilizing the stuffing. I decided to add sodium caseinate to the mushroom duxelle stuffing. The reason was that when I cooled down the stuffing I could add in Transglutaminase RM and lightly set the stuffing on the exterior of the tenderloin. That’s where the Idea started. After a little testing I found that the mixture would stick to the outside of the meat just fine but the texture was slightly too dense. So I took it to the next level, I made the duxelle a little softer than before. This way the texture is not as firm. I made a layer of prosciutto and dusted it with transglutaminase, spread the duxelle mixture over the prosciutto, gently dusted the seared tenderloin with Transglutaminase RM and placed it in the middle. Tightly wrapped the whole thing in plastic wrap, and let it set overnight. It worked out beautifully. This can be applied to any stuffing that gives you issues. Two simple ingredients can make for a great presentation and piece of mind when slicing. So give it a try the next time you find your stuffing giving you issues.