The Mystery of the Cream Fraiche Disk

The Mystery of the Creme Fraiche Disk

We get many questions about dishes that people had in a restaurant. A dish can look simple enough but when they eat it, it blows their minds. That is the true power of a well crafted recipe –  the dish should always be better than the sum of its parts. We recently received a question about a dish like this. Bobby recently had a meal that he and his wife loved but couldn’t quite figure out. The dish was creme fraiche with caviar but the creme fraiche was in the form of a disk. These are two ingredients that are paired together constantly but the chef transformed it in a way that changed Bobby’s Idea of what it could be. Bobby had a question on how he could recreate it himself.

“What is this creme fraiche disk made of?”

Initially when I read this question I assumed the “disk” was crispy. But I needed to know for sure before I started to rack my brain to figure out how to make a crispy wafer of creme fraiche. That question would be more about technique than ingredient. So I asked Bobby what the texture of the disk was and he replied that “It was firm/creamy, but solid”. So this sent me on a different path. Texture plays such a massive part in what we do. The two adjectives he used were exactly what I needed to figure out what it was that he was dealing with. “Firm/creamy”? These descriptors pointed to a gelling agent. Creamy typically leads me towards two ingredients – Iota Carrageenan or Gellan Gum LT100. Both Iota and LT100 create soft elastic gels. The only thing that potentially steers me away from those ingredients is their “flavor release”. Flavor release is attributed to the melting temperature of the gel. In this case both gels melt around 165°F, which means the flavor of the creme fraiche would be muted or dulled by the gel. Creme fraiche is a pretty delicate flavor, so I doubt it was made with something that would just cover it up. I also know the gel isn’t served hot because it has caviar, so this rules out Gellan Gum LT100 and Carrageenan Iota.

My next thought was a bit more simplistic: panna cotta. It made perfect sense. Panna cotta is made from a small amount of gelatin to create a firm but creamy gel out of milk. So I suggested to Bobby our Perfectagel Platinum, which has the cleanest flavor of all the gelatins and would work great for this creme fraiche disk. You may be asking, “What about flavor release?” The best part about gelatin is that it melts at body temperature 97F. This means that it has the best flavor release of any gelling agent. One piece of advice I couldn’t give Bobby was an exact amount to use for his recreation of the gel. I wasn’t there to eat the firm/creamy disk of creme fraiche and don’t know its exact texture. So I let Bobby know that he may have to test the gel a few times before he gets it right.

While in the process of writing this, Bobby wrote us back and shared with us some images of the success he had with his dish. I felt like a proud papa. Check out the images below: 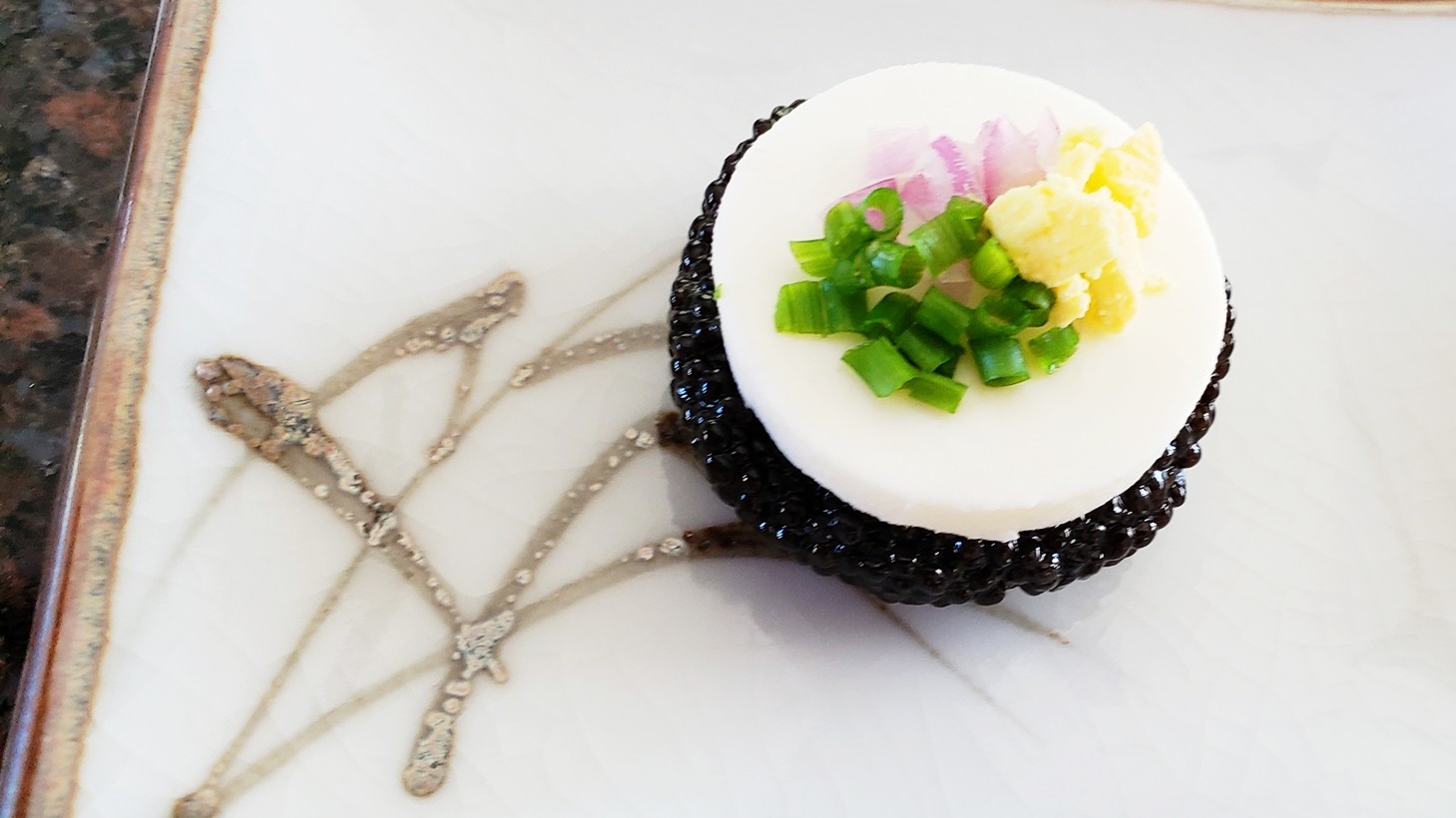