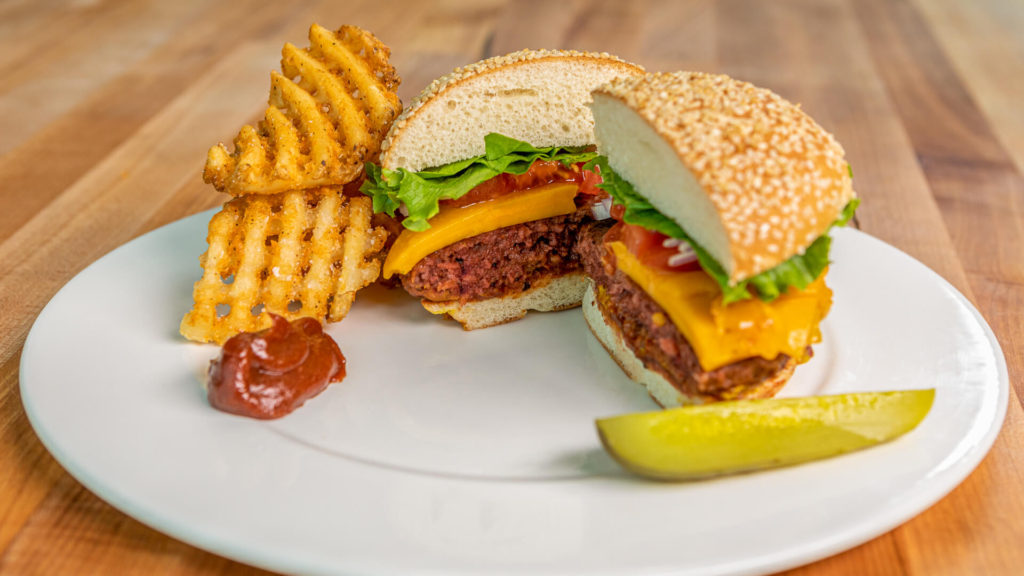 Plunging Myself Into Plant Based Meat

Every once in a while I bite off more than I can chew. As a chef I have a tendency to load my plate with as much as possible to test my limits. This past 5 weeks was no different. We decided that we wanted to tackle the task of making a plant based ground “beef”. This came about as more and more often we were asked questions on how to do this and what ingredients to use. This was a daunting task. We decided to put some theories we had to the test. We wanted to make a recipe that was accessible to everyone who wanted to try it. Over that five weeks we conducted around 100 unique tests to make a plant based ground “beef” patty that we are proud of. Below is our mission statement for the recipe and how we achieved each aspect of it.

Our mission statements for this recipe:

“How can I make a plant based meat that looks, cooks, and tastes like beef?”

Assembling a Plant Based Puzzle.

Let us tell you, these past 5 weeks has been a roller coaster ride. While we were never 100% off track it constantly felt like we could be flung from the rails and into oblivion. The first few days were all about getting the consistency right. A lot of people believe that methylcellulose is the primary binder for a vegan patty, because it’s what Impossible Burger uses. In testing I found that this quickly became an issue, methylcellulose is a great binder but it wasn’t adding anything to the “meaty” texture. Also once the patty was cooked it crumbled immediately. Nobody wants this in a burger right? We want resistance to the bite, chewy but delicate. There is a fine line we need to walk.

One of the fun parts of being in the test kitchen is having access to a lot of different ingredients. We ran a simple test by mixing two dozen different flours and plant-based proteins in a 1:1 ratio with water to see the difference in texture. Most of the flours were too wet so those were a no go. The plant based proteins and protein concentrates showed more promise. Right off the bat 2 stuck out, a pea protein and faba bean protein. The pea protein absorbed the water very well but it had a slightly gritty texture. The faba bean protein was glossy and sticky, but had an off taste. We made a batch with each of the proteins and did a blind taste test side by side. The clear winner was the faba bean protein, as it cooked it created a nice texture within the patty. The pea protein became too dense and the gritty texture came through in the final product. Even at lower ratios the grittiness was detectable. So we decided to move forward with the faba bean protein. Thankfully we were able to specially source a refined version of the same protein that had a neutral flavor.

Did you know how many different types of textured vegetable protein (TVP) there are? We ended up testing about 12 different types, they varied in size, shape, color, and protein content. This all boiled down to mouth feel and ease of use. Some TVP required pre hydration, and that threw off every aspect of the recipe. Some TVP made the mixture too crumbly. Finally we found one that was just right. We settled on a TVP that had a similar size to ground beef when it’s passed through a grinder. About ¼ in and smaller is what we were looking for. We were happy with the texture of the “meat”. So if you’re using our recipe with your favorite TVP and it’s not coming out quite right, the TVP may be the culprit.

Fat actually came pretty easily. It’s one of those parts of the recipes that never really changed. We used our flavorless coconut oil which melts at a similar temperature as beef tallow. We created an emulsion using methylcellulose, water, and coconut oil. We Then froze the emulsion and scraped it with a fork to create the little fat globules that you see dispersed throughout ground beef. This worked great, the methylcellulose gels as its heated and it helps prevent all the fat from running out of the patty. Now, it’s important to use a flavorless coconut oil like our Druids Grove Organic Coconut Oil, unless you prefer the taste of a coconut burger.

Now the hard part, the part that literally came down to the wire. How do you make something plant based taste and look like meat? We don’t have access to heme, the secret ingredient behind Impossible Burgers. So we went with the next best thing… Beet powder! We loved the way the beet powder made out patties look and the juice that ran out of them once they were cooked was amazing. The only downfall is, beets are sweet and even at an extremely low ratio you could detect the sweetness. So we tested a few different things, we wanted a natural color but everything other than beet powder look so unnatural. Then I had a brilliant idea what if we got fermented beet powder. The lactobacillus eats the sugars and makes a naturally sugar free beet powder! Getting too excited about an ingredient is like meeting your heroes, truth is they will probably let you down and this was no different! The fermented beet powder did not have the same color as fresh beet powder and proved to be a massive flop. After some more research and label reading I was able to find an organic beet powder that had significantly less sugars that the original brand we were using. But even then we found just the slightest bit of sweetness that could not be offset by the amount of vinegar powder in the recipe the flavor was still there. So I went to an old trick I use for my chili recipe. If you want to just the sweetness in rich foods you will need to add something bitter. The trick I always used was cocoa powder. The ratio needed to be carefully tested so these patties wouldn’t taste like chocolate burgers. After a few tests we were able to find a delicate balance where the sweetness was undetectable.

When we started to dial in the flavor of the pattys we made the mistake of making patties that were over seasoned. Not to say the pattys were inedible, actually they were too flavorful. We had slightly lost sight that we were trying to mimic raw ground beef, not fully, well balanced, seasoned meat. This plant based meat should be seasoned similar to ground beef. We scaled back on the flavors that we had added. We went for a deep dive into flavors that remind you of meat. The barnyard like aroma of white pepper, rich umami of porcini powder, amino acids, liquid smoke, garlic, onion, and thyme. We added them in small quantities to give a meaty quality to the flavor that will only be enhanced when you add salt. As you season the patty and cook it it will make for a meatier final product.

So as for our mission statements we met each of our goals.

Give our Kitchen Alchemy DIY Plant-Based Burger recipe a try! Who says a delicious DIY Plant-based burger is impossible? Believe it or not, a juicy flavorful plant-based patty is not beyond your reach. With this easy, versatile recipe, every cook can create a delicious, nutritious plant-based ground ‘beef’ in your own kitchen in just a few simple steps. Remember, we’ve specially sourced the key ingredients in this recipe for the perfect texture, flavor and experience. Sourcing the main ingredients from other suppliers will not guarantee that you’ll get the same phenomenal plant-based burger experience!

Forget about cocoa and beet and stuff. Instead of heme you can take a couple of iron supplement tablets (must be a water soluble kind, I used ferrous sulphate), crush them up and mix with a bit of water (I added 150mg ferrous sulphate and 10ml of water into a medicine dropper bottle). It tastes like blood, but stronger.
Add a few drops of that and it will taste exactly like ground beef. I put way too much on the first time and couldn’t believe it… it tasted more “ground beefy” than actual ground beef does (not nice).