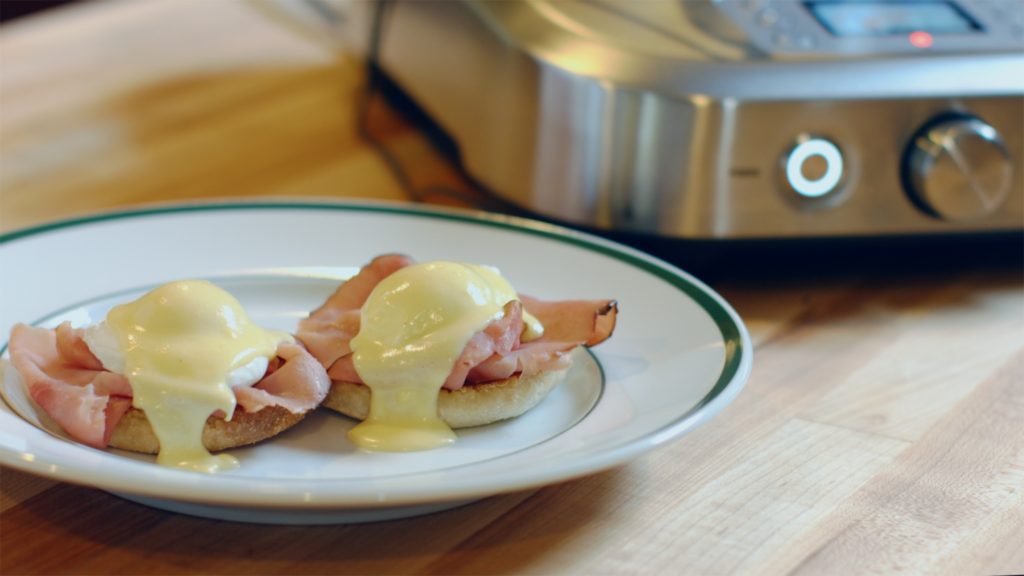 Hollandaise sauce is sunshine on a spoon—silken, glossy, and the richest shade of yellow. It is lush with egg yolks, velvety with butter, and sparkling with lemon. Auguste Escoffier dubbed it one of the five “mother sauces” of cuisine—that is, one of the sauces upon which all other sauces, like béarnaise, are built. Compared to some of Escoffier’s other sauces, hollandaise looks simple. At least it doesn’t require you to reduce a cow and three bottles of wine into a tablespoon.

Hollandaise may be simple, but it’s not easy. Despite being named after the Netherlands (“Holland”), la sauce hollandaise is very, very French. It is finicky, decadent, and often unstable. Making it can be a sophisticated form of masochism. In a traditional hollandaise, egg yolks are thickened to custard by beating over simmering water in a double boiler to prevent curdling. Too much heat, and the egg proteins freak out and clump together. Too little heat, and nothing happens at all. Then butter must be emulsified drop by drop, coaxing and coating the protein molecules. No wonder we eat out when we want eggs Benedict, even if the sauce is sub-par.

But fear not, such trials and tribulations are a thing of the past. For our modern hollandaise, we use a revolutionary gadget called The Control Freak. It looks like a sleek version of the hotplate you had in college, but it’s way cooler. The Control Freak is an induction burner so precise that it can double as an immersion circulator. It precisely maintains the temperature of what you are cooking within a fraction of a degree. The Control Freak lets you make hollandaise without the headaches. It is like a Saucier for Dummies, allowing your proteins and fats to mingle at the perfect temperature, coming together in a marvelously sheened, saffron-tinted glory. No constant whisking, no double boiling, no mistakes.

So prepare to ditch your brunch reservations and make eggs Benny for twenty. Your sauce will be perfect whenever you are ready to serve it. Just leave it to The Control Freak—the machine, that is, not your partner/spouse.

It’s all about control.

The Control Freak, as the name implies, gives you precise temperature control (down to a fraction of a degree) over whatever you are cooking. Using super sensitive probes, it continually adjusts itself to maintain a given temperature. By contrast, if you pop something in the oven at 400°F/204°C degrees, the temperature of whatever you are cooking will fluctuate wildly. Ditto if you put something in a pot on the stovetop over medium-high heat. Whatever’s in the pot will go from cool to massively hot with virtually no control over the actual temperature.

With the Control Freak, you can make pancakes that will never burn. You can perfectly temper chocolate, maintaining the proper temperature at each stage. You can deep-fry without worrying about the temperature of the oil being too low or too high. Of course, you can sous-vide. And naturally, you can make your hollandaise—and you can hold it.

Essentially, The Control Freak is like the ultimate power-up for your cooking skills. It takes you instantly from being a bumbling noob to executing dishes that would challenge even a sous chef with years of experience on the line.

How to hold it.

Let’s face it, unless you live Downton Abbey–style, with a house full of servants, you probably won’t be eating hollandaise the minute it is made. There is asparagus to be chilled, eggs to be poached, and guests to be corralled. So how do you keep it warm and ready without breaking it? Julia Child recommended whisking in another Escoffier mother sauce, the béchamel. Other chefs advise keeping it in a warm place (but not too warm) for no longer than an hour. Unfortunately, none of this advice ensures that you will not be serving up a hot curdled mess. 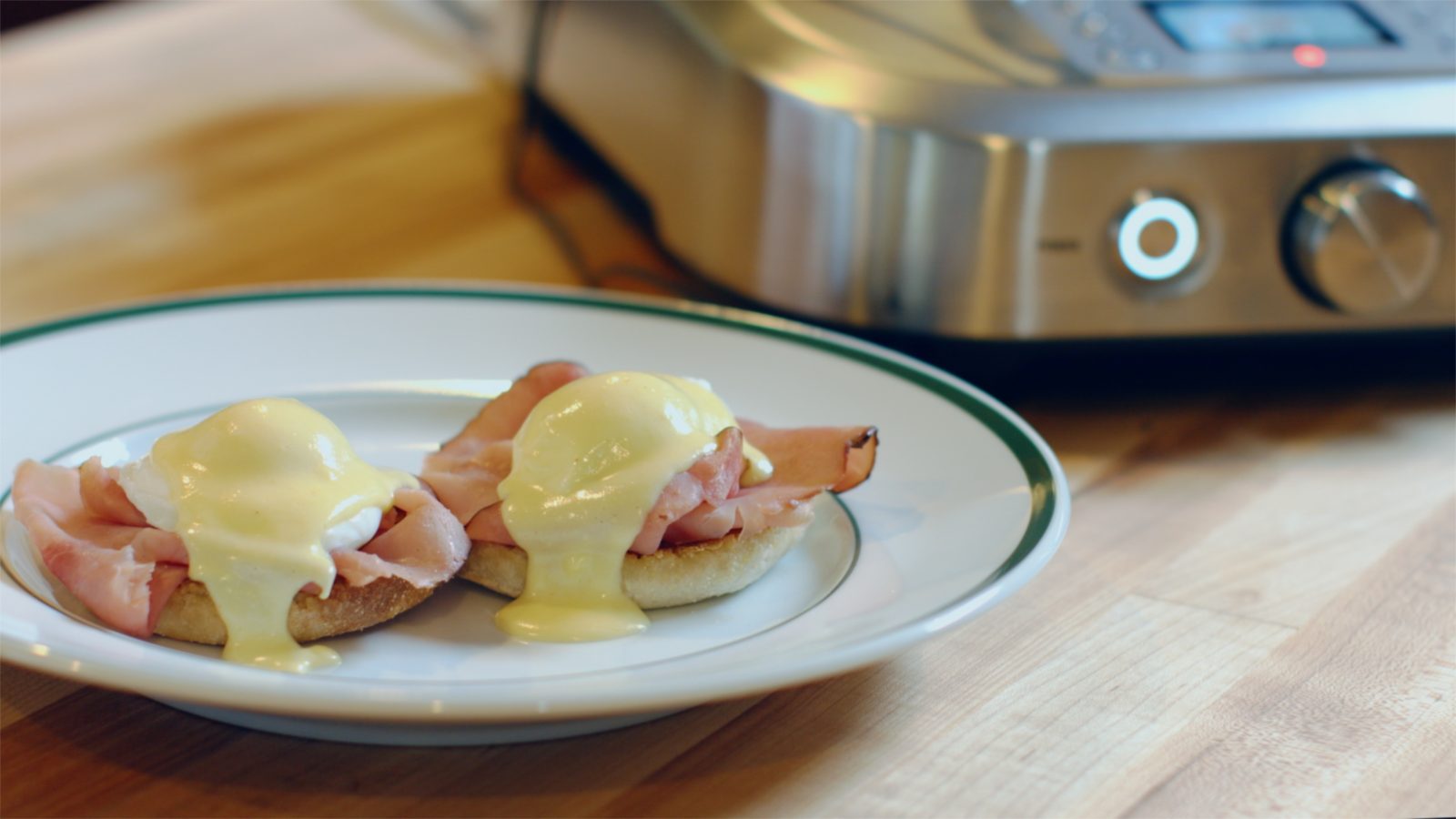 Cool idea! But why does the video say to use 167 degrees, and the written recipe says to use 140 degrees?

167 is the correct temp, 140 is the holding temp. We’re going to make it more clear. Thanks for checking!

hi, Just got my Control Freak, finally. Super excited to make brunch, but hell-bent on making David’s recipe for Hollandaise. Can’t find online anywhere. When David Pietranczyk made this recipe he appeared to use White Wine and Lemon juice, what are the measurements for that recipe? Can you substitute the water here for White Wine in his recipe? Help, singed -finally getting Freaky (for Brunch)

Not sure since it’s not one of our recipes, but we’re friends with Dave so we’ll reach out and see if we can get that information.

We chatted with Dave and he was using our recipe. The only reason you would add white wine vinegar to a hollandaise would be in place of the lemon juice. the water is crucial only for the thickness of the sauce, replacing it with white wine or white wine vinegar would not taste good.

[…] our Fuggadaboutit Hollandaise recipe a try! In a traditional hollandaise, egg yolks are thickened to custard by beating over […]

I plan to try this soon. I would like to see many more recipes that use the Control Freak. I got mine a few weeks ago and finding info on how to use it with recipes is not easy.