Pop it like it’s Hot: Not Your Papa’s Pop Rocks

Americans love all things carbonated—Diet Coke, Bollinger, Chinese shrimp chips, anything that fizzes on the tongue. We also love things that explode, like fireworks. And we love sugar. Ergo, we love Pop Rocks. They are the stuff of urban legend: A child star reportedly drank a six-pack of soda, ate six packets of Pop Rocks, and died. Danger is part of the Pop Rocks appeal. On your tongue, Pop Rocks blow your mind.

The science behind popping sugar is both simple and enthralling. Carbon dioxide is pumped into hot sugary syrup. The sugar cools into candy with tiny bubbles of carbon dioxide trapped inside. When the candy dissolves in your mouth, the bubbles of CO2 erupt—et voilà! The candy bangs. It takes very little moisture to make the candy pop. Just imagine the air on a humid summer day. In fact, General Foods took Pop Rocks off the market in 1983 because too many bags were exploding on the shelves.

Fun fact: The French have been constant in their devotion to Le Pop Rock, sipping Pop Rock and nitrogen cocktails in snug Parisian boîtes. But for Americans, Pop Rocks became the antithesis of cool, in the same category of other 1980s fly-by-nights like Debbie Gibson and Corey Haim.

That is, until now. Carbonated candy is back, in all its retro glory. What’s more, you can now customize the flavor to anything that suits your palate. It’s not just about artificial strawberry and grape anymore. Culinary Crystals are unflavored popping candies. You can spice them up with super-concentrated flavor drops, which come in a riot of options—from horehound to honeydew to cayenne to licorice.

The process is simple. You add the drops to the Culinary Crystals flavor base and then coat the candy with it. You can sprinkle black pepper crystals on your strawberries with brown sugar and balsamic vinegar.  Then you can coat foie gras lollipops in blackcurrant crystals à la Graham Elliot, or do Heston Blumenthal’s molten chocolate popping cake.

You don’t even have to limit yourself to flavor drops. As long as you have your crystals and your flavor base, the possibilities are endless. All you need is a flavoring agent that is oil-based, because anything containing water will make your crystals pop. Wasabi crystals on your pretzel? Bacon fat crystals on your spinach salad? Sichuan peppercorn crystals on your zha jiang noodles? Anything that is oil-based or that you can infuse in oil is fair game, be it spice, fruit, or herb. And we mean anything. Let’s just say that there are certain oils that when combined with Culinary Crystals will blow your mind in a totally different way. Hint: You may enjoy them sprinkled atop brownies. Especially on April 20. Nudge. Nudge. Wink. Wink.

Can’t you just feel it now? That instant nostalgia for childhood and simpler times. Let’s get popping.

Did someone say fizz?

Yes. There will be fizz. Culinary Crystals are simply sugar and lactic acid permeated with carbon dioxide. This makes them pop, or fizz, when they dissolve. Hopefully this will be in your mouth and not in your hands (or anyplace else).

How to prevent popping prematurely

The flavor base acts a water-repellent coating to helps protect your crystals from moisture. If you are not using Culinary Crystals flavor drops, make sure the flavorings you do use are oil-based.

Keep your flavoring equipment clean and dry. When you’ve finished flavoring your crystals, store them (as well as any unflavored ones) somewhere cool and dry—ideally in an airtight container with minimal oxygen.

How to quickly infuse oils

A fast and easy way to infuse any oil is to bang it with your choice of spice, herb, or fruit in a whipping siphon. Otherwise, you can flavor any neutral-tasting oil with almost any such flavor by more traditional means.

The Goldilocks effect (not too hot, not too cold)

This is important: If your bowl is cold, then the flavor base will harden before it coats the crystals. If it’s steaming from the dishwasher, your crystals will pop when you add them. Room-temp and of course scrupulously dry is the ideal environment for coating your crystals. 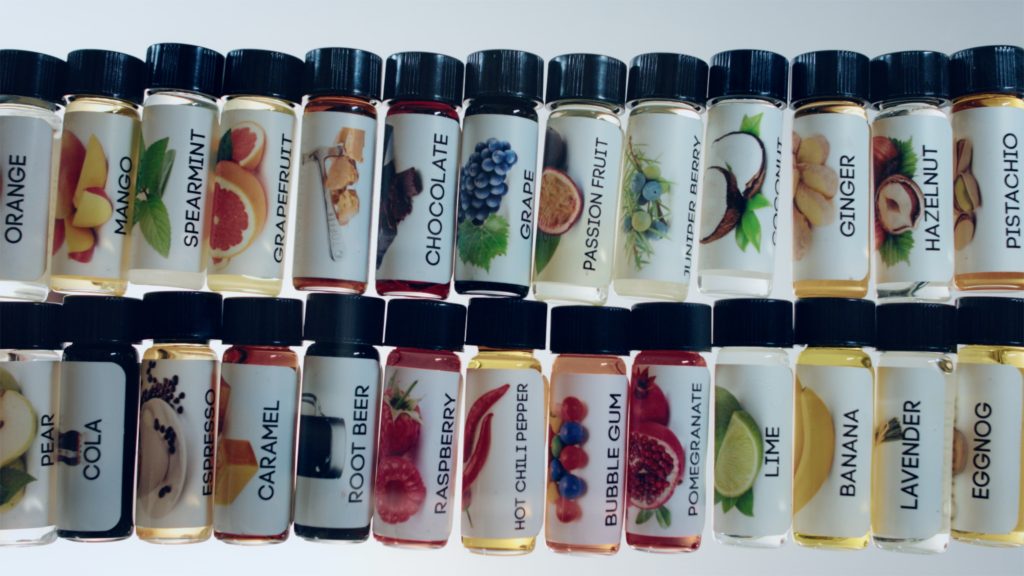 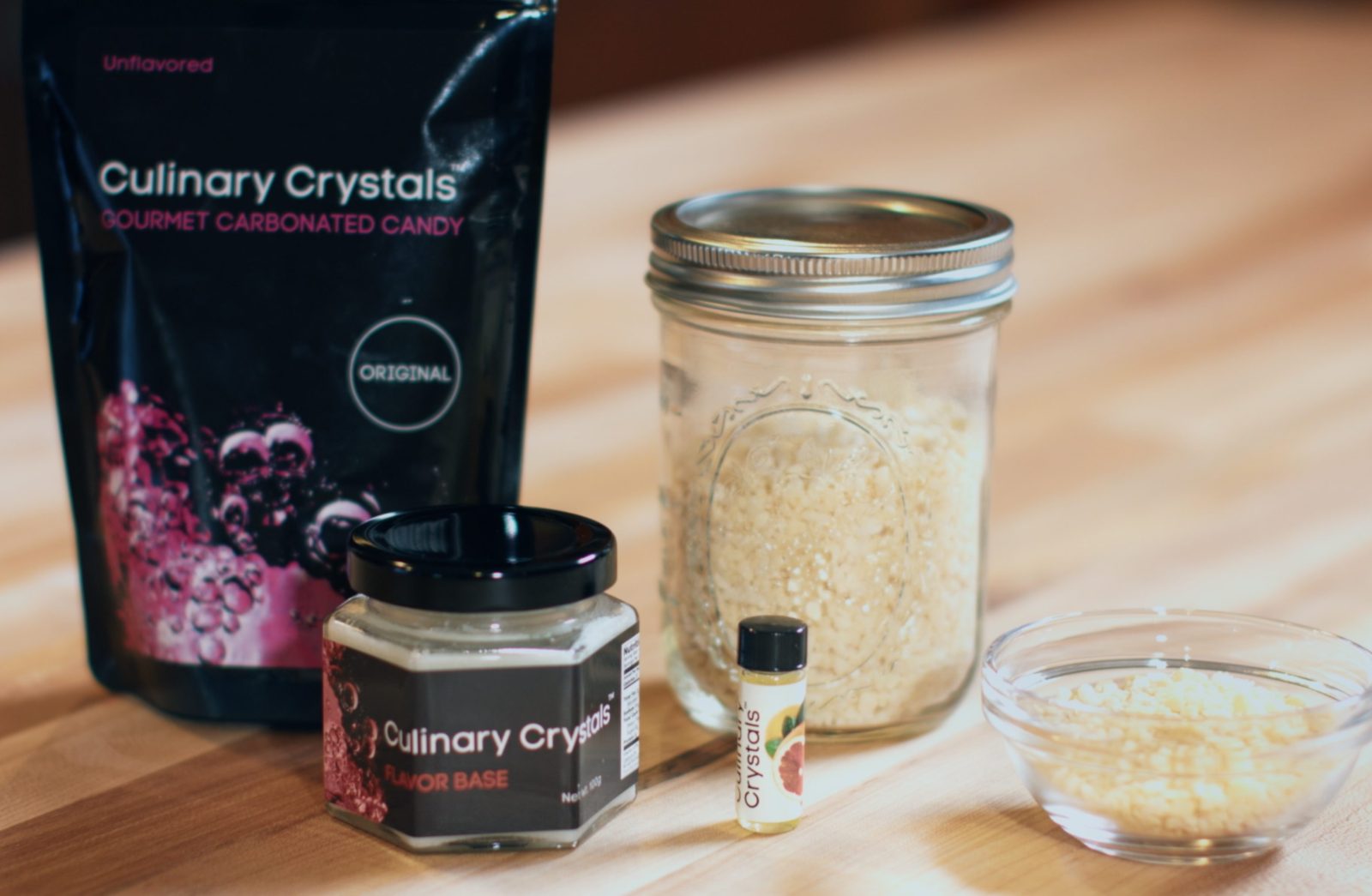 Can these be mixed directly into chocolate?

I want to make some sandwich cookies for St. Patrick’s Day. I will be using buttercream frosting with mint flavoring added as well as green food coloring. Can I add pop rocks to the frosting or will the added liquids caused them to pop?

If you want to do that we recommend coating the crystals first using our savor system. This gives them additional protection from the moisture of the food coloring.

Can you make them alcoholic? i.e. vodka + soda pop rocks?

There is no equipment that makes alcoholic pop rocks that we’re aware of.

Really cool. However I have been living in Paris for 20 years and I have never seen or heard of popping candy used in anything, especially not the watered down mixers that pass for cocktails in Parisian night clubs.