The Cure for What Ails You: Makin’ Bacon with Prague Powder

Cured bacon as we know it got its start in the Middle Ages and was enjoyed by kings and peasants alike. Few foods today are as popular as bacon. The American obsession with it has led to creations such as bacon jam, chocolate-covered bacon, and bacon sushi. Yet despite our fetish with it, few of us attempt to make bacon from scratch at home. We feel safer if our bacon is left to the experts, shrink-wrapped, and doled out to us in FDA-approved, calorie-counted slices. But homemade bacon is surprisingly easy to make. You simply rub pork belly with seasonings, add one secret ingredient, and let it sit in the fridge for a week. Easy-peasy.

Many people think that bacon needs to be smoked, which may contribute to the trepidation that surrounds making it at home. And while smoking does add another flavor dimension to bacon, it is not strictly necessary. What is necessary is the addition of sodium nitrite, the secret ingredient. Sodium nitrite is an antioxidant essential to the curing process, since it acts as a preservative and prevents the growth of botulism. It also serves to flavor the bacon. We prefer to use Prague Powder #1, which is a combination of table salt, sodium nitrite, and red food dye. The dye is added so that it can be distinguished from plain table salt, but it also contributes to bacon’s characteristic rosy hue.

Nitrites have gotten a bad rap in recent years thanks to sensationalism in the press. But what most people don’t know is that nitrites are a naturally occurring substance. If you avoid bacon because of the nitrites, then you should probably also avoid celery and spinach and beets, all of which naturally contain nitrites in abundance. In fact, the “nitrite-free” bacon at your Whole Foods is not really nitrite free, it is just cured with celery juice. Any toxicity associated with nitrites is due primarily to overconsumption. But even if you lived exclusively on bacon, you would be hard pressed to consume too many nitrites. (Of course, there may be other health ramifications of such a diet.) And anyone who is paranoid should remember that potatoes are full of solanine, eggplant contains nicotine, and chickpeas and fava beans have a dose of cyanide, all of which could be deadly if ingested in large amounts.

In addition to the personal satisfaction of eating bacon that you’ve handcrafted, you also have the luxury of complete artistic control. You might crave allspice, nutmeg, and white pepper in one batch of home-cured bacon. Perhaps an Asian-style bacon with soy sauce and star anise stirs your soul. Or you might score a particularly toothsome piece of artisanal pork belly, from a pampered pig raised exclusively on walnuts, berries, and poetry. Your flavor combinations can be as simple or as complex as you want. You can brine the pork belly with supermarket ingredients, or coat it with herbs and spices you have grown yourself, then smoke it over a hardwood fire. Regardless, when your guests moan in pleasure, you get to claim all the credit.

There are two methods for curing bacon: using a curing rub and brining. The results are nearly identical, although our brine recipe doesn’t include any sugar, so it’s a good option if you prefer your bacon with no sweetness.

Sodium nitrite has been used to cure meat since the Middle Ages. Its most important function is to prevent botulism. However, it also contributes to the flavor that we have come to associate with cured meats. “Nitrite-free” cured meats are mainly a marketing ploy. Typically, they still contain nitrites, but those nitrites are from a natural source such as celery juice rather than from direct application of sodium nitrite.

Yes, nitrites can be toxic to human beings at high levels: 22 milligrams of sodium nitrite per kilogram of body weight has been known to be fatal, but a 120-pound adult would need to ingest 79 tablespoons of the stuff to reach this level.

Also known as Insta Cure, DQ Pink Curing Salt, and Sel Rose, Prague Powder is a key ingredient in most cured meats. There are two types. Use Prague Powder #1 for short cures (a week or less), such as bacon or sausage, and Prague Powder #2 for longer cures, like ham or hard salami. (In addition to salt and sodium nitrite, Prague Powder #2 contains sodium nitrate, which over time transforms into nitrites and continues to preserve your meat for the duration of the cure.)

Don’t confuse Prague Powder with Himalayan pink salt, which is just regular sodium chloride or table salt that gets its pinkish hue from trace minerals. This type of salt will not protect your meat from botulism.

You can add almost any herbs, spices, or other flavoring ingredient to your bacon cure. But stay away from acids, such as lemon juice and vinegar. Too much acid will rapidly decompose the nitrites into nitric oxide, which is a compressed gas that can literally blow up your bacon. 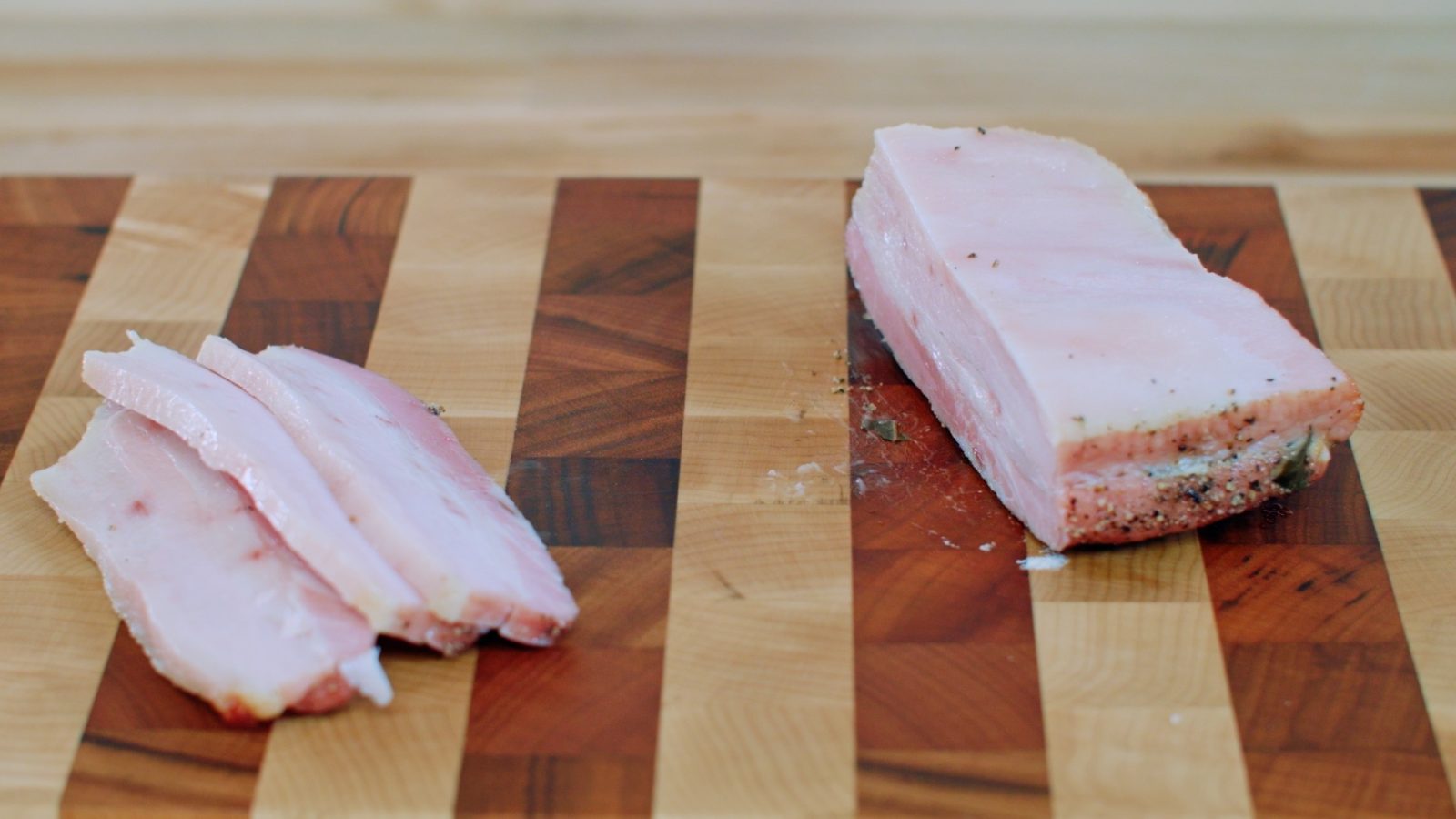 very helpful, will be making the bacon very soon

Would this method also work for curing some short ribs?

Is it not necessary to rinse the pork belly after curing and before baking to 150 degrees internal? I would think it would be too salty if not rinsed first. Only asking as I do not see that step.

Yes, It should have a rinse step. We will add it in.

“Love this roundup idea! I am making a “basics” cookbook for a few of my girlfriends who are getting married this summer. Definitely going to include some of these ideas!

Does anyone know what this curing with Prager#1 does to the enzymes of the meat?

Not entirely sure but it may kill most of the enzymes. Here is some additional info on prague powder.