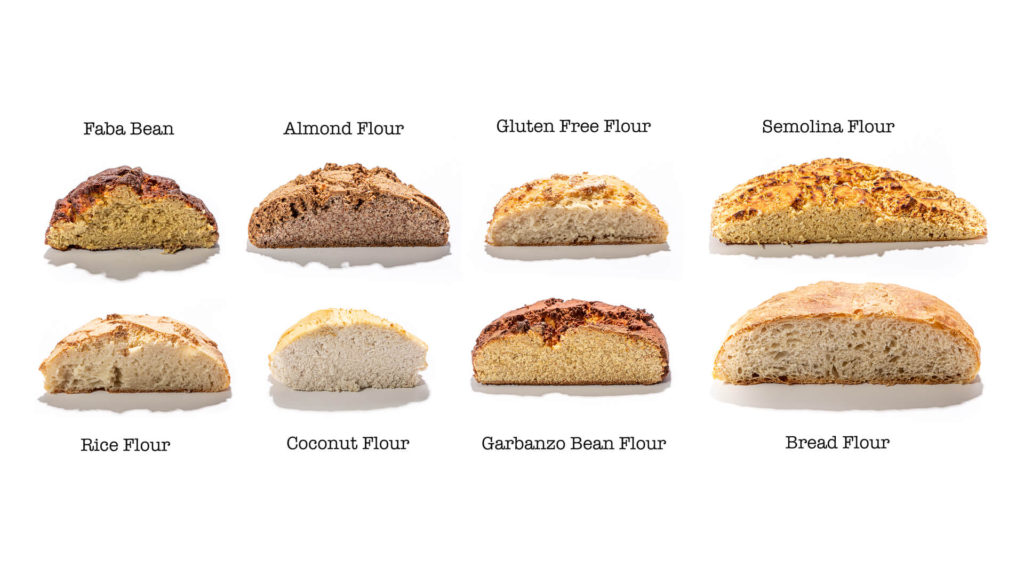 Customer questions often get me thinking, and recently we had a question about adding vital wheat gluten to different types of non wheat flour. This could be a cool way to create different bread textures or even make breads when there is a shortage of flour. With questions like this it’s difficult to know exactly how to answer without doing any testing. Hypothetically this should work, but without doing any testing the scientific theory doesn’t work. So we decided to try different types of flour to see if this could work. We decided to use our No Knead bread recipe. This recipe allows for the gluten to develop overnight and doesn’t require much mixing. The flours we are attempting to make loaves of bread are Coconut flour, Rice flour, faba bean protein concentrate, garbanzo bean flour, I’m free perfect gluten free flour, Semolina flour, and Almond flour. All these ingredients have different textures, flavor profiles, and protein/fat/carbohydrate contents. Honestly this is quite the long shot, but it’s also a very fun experiment to see how far you can push an ingredient. This test is to see if the gluten can improve a flour’s ability to rise in the slightest. If there is even a glimmer of hope then the testing can continue. let’s just say the findings were interesting…

“Can you make any non-wheat flour into bread flour?”

Let’s break down each loaf of gluten fortified bread. Each bread was intended to be mixed, proofed, and cooked under the same conditions. There were some exceptions that had to be made. let’s take a look at them one by one.

Coconut flour – This one was a complete failure, The first issue was the hydration, this flour needed about 4 times the water as the base recipe to even form a dough. After 24 hours of resting, the gluten wasn’t able to make any bonds. The dough was nearly unchanged. This one was expected since the coconut flour is not a starch and does not make for a sticky environment for the gluten. The proofed loaf did not change much other than the flavor. The high sugar content of the coconut was changed with the 18 hour proof. The sweetness was gone and the loaf was sour. Don’t try this, it’s yucky. A silver lining could be the addition of coconut flour to a sour dough to increase the sour flavor during fermentation.

Rice flour -This one actually slightly resembled a loaf of bread in terms of appearance. The mixing was similar to a traditional dough but was not sticky or elastic. Once again this is understandable due to the nature of rice flour. The gluten seems to need a sticky starch to help it. The rice loaf proofed fairly well with noticeable fissures along the outside. This tells me that the texture of the rice flour was hindering the gluten.

Faba bean protein concentrate -The faba bean concentrate had the highest protein content of all the “flours”. I wanted to use this since it was sticky compared to the other flours. The mixing was difficult as the faba bean protein concentrate loves water. The dough came together okay but it was dense. I actually had to oil my hands so the mixture didn’t stick to my fingers when forming it. The proof was almost non existent since the dough was so dense.  Out of the oven this loaf was dark and smelled like soy sauce for some reason. It was actually pretty pleasant. The flavor was far too strong to recommend and the texture was too dense to enjoy. This may be a good addition to other flours as a way to improve the color of the crust and help the gluten disperse.

garbanzo bean flour -This one is similar to the faba bean concentrate in almost every way. The aroma and rise were just about the only differences. The mixing and color were nearly identical. The favor was less intense than the faba bean. I would not recommend this.

I’m free perfect gluten free flour – This resembled the control loaf more closely than any other Flour. The biggest difference visually being the size of the loaf. The mixing was similar to bread flour. The hydration and proof was the clear issue. A slight reduction in water content and increased amount of yeast would help this dough. The biggest improvement the gluten gave this flour was the crust. The crust of this dough was so similar to traditional bread. I feel with a bit more tweaking this could make an amazing bread. These findings are not a surprise as the I’m free perfect gluten free flour is already used to make gluten free bread. But the improvement is the exterior of the bread was pretty remarkable. I do think I will test this again.

Semolina flour – This needed extra water did end up coming together nicely. The proofing worked fine until it went into the oven. The second this dough began to heat it collapsed into a flat disk. The texture was fine if you like dry corn bread. The Gluten does seem to have an effect on the crust of all these doughs more than anything. The texture of the crust was different from corn bread but the interior was dense and dry. This falls under “no not attempt”.

Almond flour – This is the one I wanted to work the most. It just seemed like a cool concept. While it didn’t really work it made a pretty tasty “loaf”. While mixing it did not absorb water, and I am not surprised since it’s mainly fat and protein. The proofing didn’t do much, But when it baked it became this dark dense loaf. This was similar to a traditional german rye bread. Not like the breads you find in the grocery store. The exterior had a nice crispy crunch that the gluten seems to provide. The interior retained its moisture with a dark roasted nutty flavor. I think If this was improved by some of the other ingredients It could add some real depth to a loaf.

All in all these were some fun experiments. While nothing was a complete success there are some good directions that can be taken. Maybe the addition of almond flour, coconut flour,  and faba bean protein to the I’m free perfect gluten free flour. If you ever find yourself without bread flour, adding vital wheat gluten to a non wheat flour recipe could be the answer to your predicament.

Give our No-Knead Bread recipe a try! Baking bread is a breeze with this simple minute no-knead recipe. Just add instant Instaferm Red yeast, and with only 15 minutes of prep you’ll have a fresh, fragrant, fantastically tasty loaf in your own kitchen. No bread machine required.