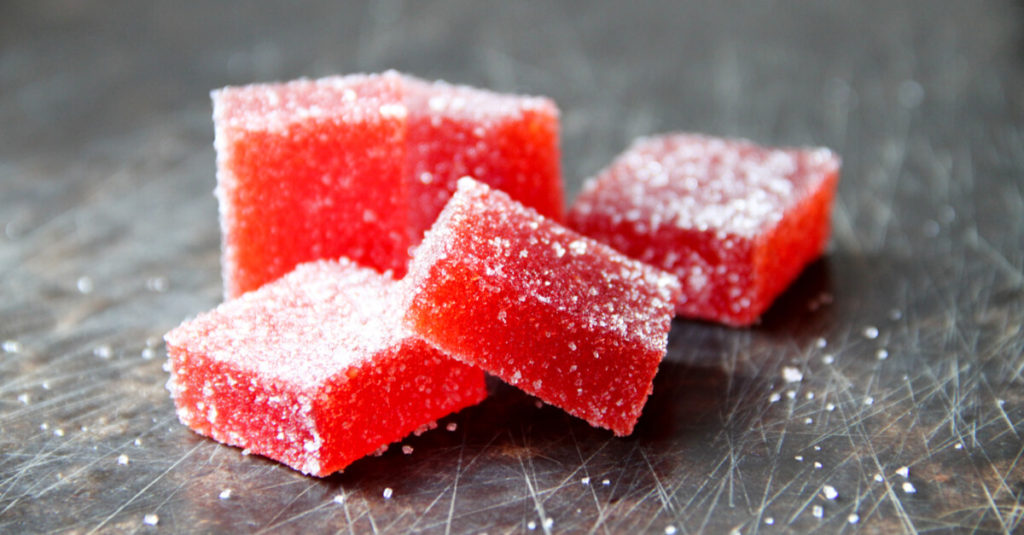 Gelatin has been the long reigning king of chewy candies. But recently we have had an influx of people wondering how to make gummy candies out of other ingredients. More often than not people attempt to use pectin as a replacement for the gelatin. This often leads to soft jelly like desserts called pate de fruit. This is because pectin is not and will never be gelatin. Gelatin and pectin have completely different properties. But this begs the question can you ever have a chewy pectin based candy that rivals the ones made from gelatin? How are they different and is there a way to make a vegan gummy that is just like the gelatin based ones?

“How do you make chewy pectin candy?”

Pectin as we stated above will never be gelatin so there is no way to simply replace gelatin with pectin and expect the same result. This is a common misconception as we often think that since they are both gelling agents that they will create the same type of gel.

Now if you are looking for an exact gelatin alternative that will mimic the texture of gelatin, we suggest our vegan gelatin. This is a one to one replacement for powdered gelatin. If you have an existing recipe for gummies and you want to turn them vegan you can simply replace the gelatin with the vegan gelatin. The only difference is that you do not need the blooming step, simply add the vegan gelatin into the sugar in the recipe and go about it as normal. Just be sure that the mixture is not below 4ph or it will not set. But let’s cover how we can make pectin into chewy candies since it’s actually a very cool process. As we all know pectin and gelatin are not created equal.

Pectin is a carbohydrate based gelling agent made from the cell walls of plants. Gelatin is a protein based gelling agent made from the bones and cartilage of animals. One would hope those two sentences would allow you to see the difference between the two. With that being said there is no conversion ratio between the two ingredients, nor do they share the same method of application. The basic method for making a gelatin gummy candy is to bloom the gelatin, mix all the ingredients, bring the mixture to a boil, pour into molds and allow it to set.

This would not work with pectin. First we should understand the type of pectin to use for this specifically. For a traditional candy that contains sugar there is only once choice. HM pectin is an ingredient that works with high sugar ratios. But it’s not only sugar that creates the gel within pectin. Unlike gelatin, which only requires that it be melted and cooled to set. Pectin requires at least 60-80% sugar content as well as an acid. Pectin needs to be below 3.5ph to set into a gel. Even at high concentrations of pectin it will never be chewy, pectin is a soft and brittle gel, this is why it makes spreadable jams and jellies so well. When making a chewy pectin candy it requires a little more finesse than a gelatin gummy. The pectin and sugar will need to be mixed with water. That mixture will need to be heated between 220°F and 240°F. Any higher will make the candies stick to your teeth, and nobody wants that. The sugars being heated to these temperatures will give the candies a perfect chew. The pectin holds the shape and gives a tenderness to the otherwise soft ball sugar. If done correctly the mixture will not caramelize or burn the pectin. Once the sugar reaches the correct temperature it can be flavored.

Now the most important part, create a mixture of 2 tsp citric acid and 1 tsp water per pound of candy. When this mixture is added it will need to be poured into a mold lined with granulated sugar immediately as the acid begint the setting of the pectin. The sugar dusting just prevents the candy from sticking to the bottom of the mold. Once cooled they should be removed, cut into the desired shape, and dusted with sugar. Check out our caramel chews below and look out for our fruit chews in the coming weeks.

Give our Bite-Sized Caramel Chews and Yummy Vegan Gummy recipes a try!

Bite Sized Caramel Chews: Try them sweet or savory – you’ll want to pop these nuggets of flavor, wrapper and all. We’ve put a few of our favorite bites in the recipe, but they can be easily swapped out to create your own unique tasty treats.

Yummy Vegan Gummy: Our yummy vegan gummies are every bit as delightful and fun as the original. If you’ve been making gummies with products like Agar and what you’re getting just isn’t right, try our yummy vegan gummy today and taste the difference for yourself.