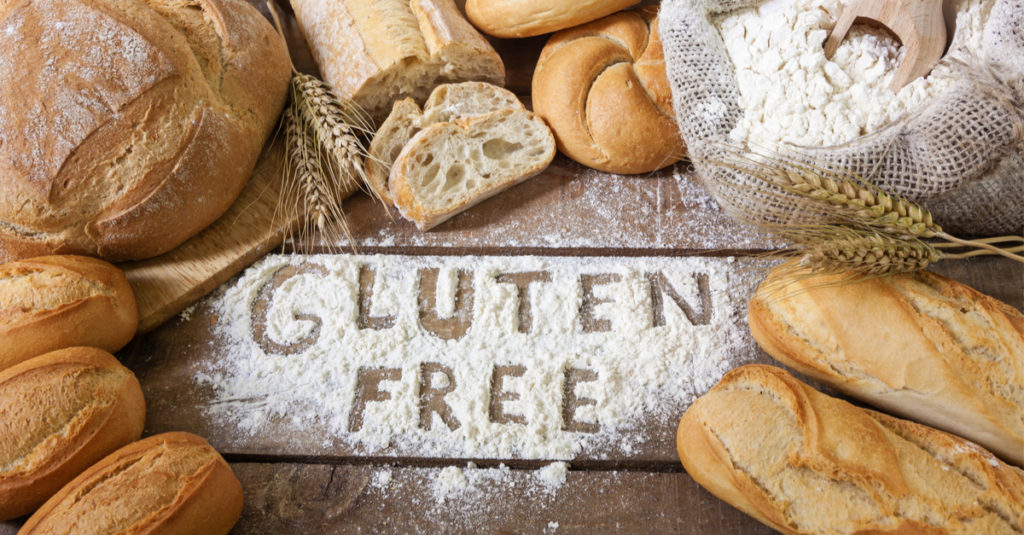 This week we were doing research about gluten free breads. We came across this little hack in the Modernist Bread book and it was really interesting. Their gluten free breads didn’t really look like the gluten free breads we have made or seen before. The rise and crumb structure were beautiful. Then we say things like Pizza and Bagels that looked amazing. If you have ever tried to make a gluten free pizza crust, it generally is a batter spread into a circle shape and baked. It’s always gummy and only resembles pizza in the sense that it’s circular. One thing that you will almost never be able to do is roll out pizza crust. As for bagels well look at the shape, a bagel is this perfectly circular bread with a dense but light oxymoronic crumb structure. How could you possibly attain that with a batter? We decided to use our own blend of gluten free flour, gluten replacement and sodium caseinate in place of the milk powder. The sodium caseinate works better with the transglutaminase. We gave this a shot, because we needed to know.

The first recipe we attempted was pizza crust. When we made the “dough” we figured this was a complete bust. This was a batter, My colleague Derek and I gave each other a look as if to say “this is a waste of time”. We went about the proofing process, I had pretty much written this off. Moved onto my other testing with this in the background. About 45 minutes later Derek called me over and said “it’s solid”. I asked him what he meant and he showed it by turning the mixing bowl over like a Dairy Queen Blizzard artist. The batter had formed into a perfect solid form. We dusted a prep table and divided up the dough. Just feeling the dough we could tell there was something special about it. We rolled it out and as per most gluten free breads the edges cracked a bit, but the dough was rolling out. This was really amazing, we dusted a pizza peel, gathered up some toppings, and popped in in the oven. It worked, we didn’t really understand how, but it worked.  So we moved on to the bagels, the first batch we screwed up the recipe and accidentally added 110% water rather than the 70% the recipe called for. This mess didn’t look like a batter, this was soup. We hadn’t realized our mistake yet because we were riding high from the pizza. The mixture set up quickly and we gave it an hour to proof.  We were able to form really nice bagels with this mixture. The only issue came with baking as they flattened out a bit. The real silver lining is that we saved some of this dough and made another pizza. The 110% hydration dough rolled out beautifully although it was a bit delicate. When we cooked it up it became so light and crispy we were thrilled. This testing was an absolute success. The next batch of bagels came out beautiful. With a little more testing these recipes will be ready to go and we cannot wait to bring them to you

“How was this possible? How do the meat glue and sodium caseinate work together to make such great gluten free breads?”

The sodium caseinate as we covered last week is a protein from milk. This protein is water soluble. Sodium caseinate and transglutaminase are hydrated by the water in the recipe. As they are hydrated the transglutaminase begins to bond proteins (glutamine and lysine) in the sodium caseinate. These proteins which have occupied the water in the recipe begin to solidify without the need to be heated. The gluten free flour, gluten replacement give the same great structure to the interior of the dough but now with another helping hand. This allows for a dough that is able to be worked into whatever shape you desire. This is such a simple solution that’s amazing to see in action. There are a number of recipes that can now be made possible. We look forward to trying tons of recipes with this amazing gluten free hack.

Stay tuned, in the coming weeks we will have more research and recipes available! In the mean time check out our Spectacular Gluten Free Sourdough recipe! This gluten free sourdough knocks it out of the park with a beautiful crust and soft, chewy crumb. The addition of a pinch of lactic acid enhances the unique tang of sourdough flavors. Enjoy it fresh and hot with soft butter or book-ending your favorite sandwich.

I challenge you to fix the texture of gluten free breads based on nut, vegetable, and fruit flours. That’s the kicker. It’s important for those following keto and diabetics.

Super excited to hear more about this

How would you achieve a flaky gluten free daily pastry as in a Jamaican patty dough?

We don’t have a recipe for that yet.

Other than the TVP is all the other stuff in the Plant based chicken gluten free? Trying to find plant based Chicken Gluten free is literally impossible so I want to make it myself but the ingredients you have down some I can not find out if it is gluten free.

And yes the other items are gluten free.